Last weekend I added two birds to my patch year list: Greenfinch (go figure why it took me that long to find this normally common bird) and Mistle Thrush taking me to the (not so) grand total of 55 for the year so far.

I also took a few snaps as I walked celebrating how lucky I feel that this beautiful landscape not only exists in the urban sprawl of East London, but because it is literally two minutes walk from my new doorstep.

Broom Fields: Point A on map

Point B on map

Odd one out? Point C on a map

I spent time searching here in vain for a Water Rail: Point E on map

This weekend I spent several hours walking around my local patch (Wanstead Flats and Wanstead Park) trying to build up my patch list of birds.

With several common birds missing from my list so far this year, I have got up to a barely-acceptable 53. Additions from this weekend were:

Ticks on a list never, of course, tell the full story. Take the Siskin as an example: Several local birders told me where Siskins had been seen on Saturday. I went to the wooded area and stared up high into the tall trees, but with no luck. I returned on Sunday morning determined to find them. I knew Siskins travelled closely with charms of Goldfinches. This morning I spent more than 20 minutes scanning the tops of trees and peering at every distant Goldfinch and Blue Tit closely. When I eventually saw a pair, I felt like I had earned that tick, but more importantly, it heightened my enjoyment of watching these beautiful little birds knowing the effort I had taken to find them.

I have also heard that a Water Rail has been seen on the Wanstead Park lakes, but I could not find him. However, rather like a Bloodhound, when the scent of a species of bird is with me, I can be pretty stubborn about finding it. Even if that means cheating a little. I whizzed down to Rainham, where I knew I might see one, and for a general change of scenery…

Indeed the change of scenery came with a change of birds and I added a few to my other list for 2015: my UK year list…

With several of the new Wanstead birds counting twice, this took me to 73 species for the year in the UK thus far.

Water Rail are not uncommon, although only about 1000 pairs breed in the UK (supplemented by Winter migrants), but they are exceptionally difficult to see. They skulk around deep in reeds, rarely showing themselves, but occasionally giving themselves away with their distinctive calls which have been described as ranging from ‘squealing piglets’ to the ‘purring of contented squirrels’. I would normally be very pleased with a photo like this:

But recently at Rainham, the rails have been showing-off:

I love lists, and I love new ticks on my bird lists, but the joy of getting so close to such an elusive creature transcends any satisfaction of ‘collecting’ or ‘ticking’.

After Saturday was spent gallivanting around in Kent and Essex trying to improve my year list, I realised my new patch list was not going up on its own, so I nipped out early on Sunday morning.

It was not exactly prolific birding to be honest; especially after the excitement of the Slavonian Grebe last weekend (it is still there by the way). But I did add four species to my UK year list (62 so far) and eight to my patch list (now at 43 – pretty poor, but that is with only about 3 hours birding on the patch so far this year), with…

… new for the patch this year.

I must confess that I shamelessly exploit the excellent Twitter updates from Wanstead Birding to find out what has been seen where as I stroll around. Nick Croft’s Twitter tips had me on the hunt for Linnet on an area of gravelly grass known as the Police Scrape (see point X on the map below). I wandered around wondering how this uninspiring patch of land could be of use to any birds of interest when I saw a flock of small birds in the distance. I was sure they had to be Linnet, but closer inspection left me surprised but equally pleased to see seven Skylark (which close-up look nothing like Linnet – even when they are as blurry as in the picture below):

I have to say, seeing Skylark on this scrubby playing field seemed a world away from the wonderful moment in the excellent Kingbird Highway when Kenn comes across the small population of Skylarks in the US on San Juan:

[Back to reality] I then promptly bumped into Nick and some of the other Wanstead birders who kindly pointed me in the direction of a pair of displaying Stock Doves.

I shall leave this rather dry update of my patch search with a photo of a Kestrel who I found on the edge of Bush Wood at the spot marked Y on the map below. 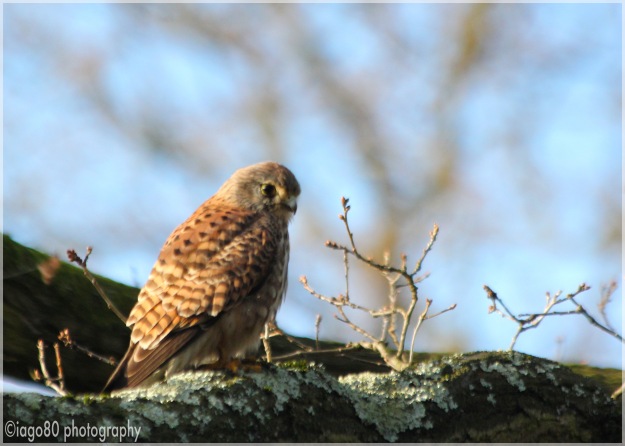 The great thing about early year birding is that it is relatively easy to find birds to add to your year list.

Ignoring the weather warnings, I drove to three of the best birding sites in the South East to boost my list: Rainham Marshes (a very brief visit, looking through a fence before they opened); Elmley Marshes; and Cliffe Pools.

At Rainham I quickly ticked off:

I first visited Elmley Marshes Nature Reserve in January last year. The wildlife was fantastic despite the terrible weather. Yesterday, it was a bit windy, but a lot nicer. However, when I had a walked a for a couple of miles and turned around to walk back to the car, the strong winds had brought some stormy weather with them. It was like being hit by a wall of stinging vertical rain and hail that was thrown into my face with gale force winds that, at times, stopped me from moving.

I eventually got back to the car, changed my soaking trousers, and drove on to Cliffe.

But, before this, and aside from the 20-30 minute long weather adventure, I also saw some great birds: 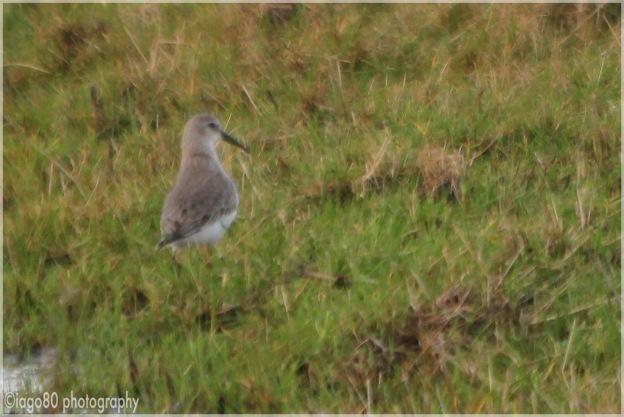 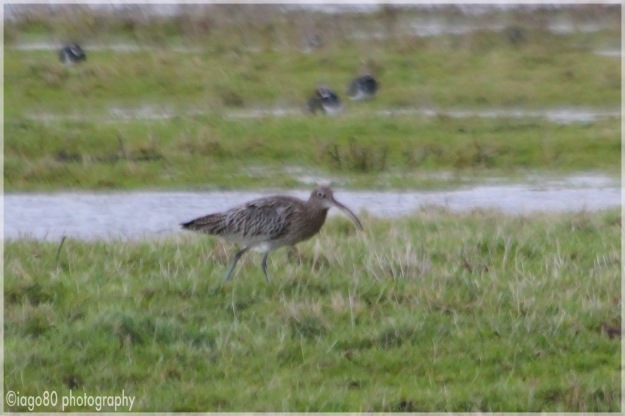 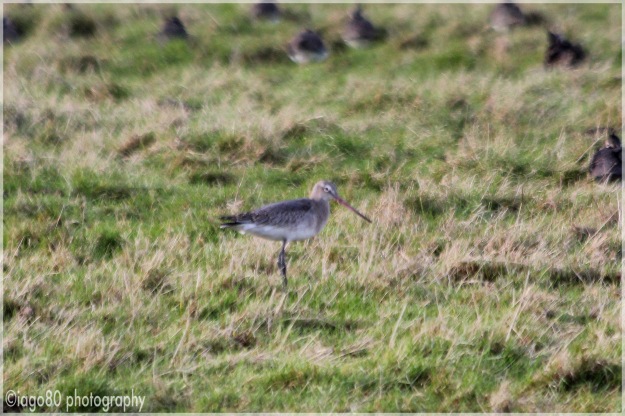 (That last photo was taken hastily through my car windscreen once I had time to stop the car and grab my camera from its bag. By the time I had wound down the window for a better shot, the Harrier had plunged into long grass)

Aside from these birds, I also added the following to my New Year list:

On the way between sites I stopped to look at an estuary and take a picture of a bridge:

Before watching some enormous but very distant flocks of Lapwing and other waders at Cliffe:

I didn’t get any good shots of birds at Cliffe, but I did add the following three to my year-list:

I finished the day with a year list of 58 and watched the Sun set over the Thames Estuary:

A Big Birding Year was SO 2014. As a relatively new birder, I have set myself two birding-related resolutions for 2015:

1) To increase my ‘Life List’ of birds.
2) To intensify my understanding of the birdlife in a particular small area or ‘patch’ – in my case this is now the Wanstead Flats and surrounding parkland.

This morning I was delighted to be able to make progress against both.

A Slavonian Grebe (Horned Grebe if you are reading this from across the pond) – a rare-ish winter visitor to London – made an appearance in Wanstead Park yesterday and has kindly stayed long enough for me to take its picture: 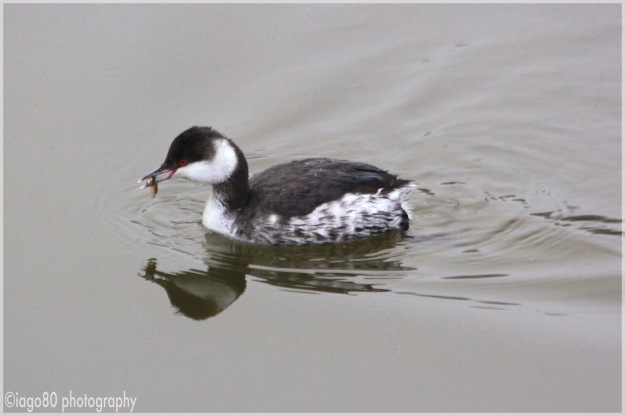 Anyone lucky enough to see this beautiful bird (it is even more stunning in its summer plumage) will notice the red eyes. This feature, along with the horned feathers it has in the summer have led some to call it the devil-diver.

The Native American tribes of the Blackfoot have a legend that a trickster called ‘Old Man’ persuaded the ducks to close their eyes and dance. He killed them one by one. However, a small duck looked and saw this evil befalling his friends and so alerted them. This ‘duck’ was the Slavonian/Horned Grebe and became renowned for noticing trouble early.

I was pleased to notice the Slavonian Grebe early in the year so it could be added to my patch list, my UK year list, and my life list.

Here are a couple of maps with ‘X’ marking the spot on my patch where the grebe was to be found:

In case anyone is interested how my patch list is going following a couple of hours out this morning and about 20 minutes in the rain yesterday, here you go:

I had an unexpected birding trip out on New Year’s Eve itself. I visited Holme Pierrepont National Watersports Centre near Nottingham. The man-made rowing lake is 2km long by about 100m wide and is a great place to see waterfowl: 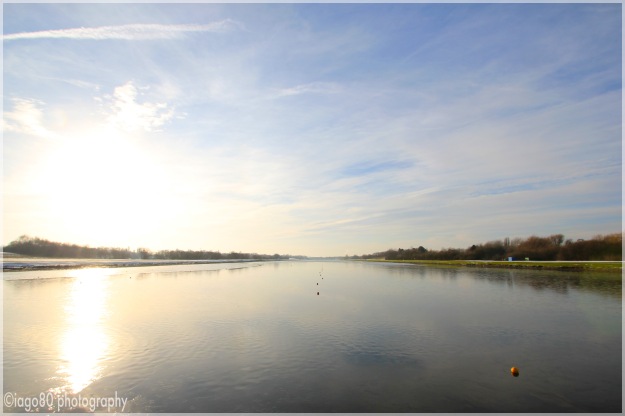 I saw online that there had recently been sightings of Scaup duck at the rowing lake. This was would have been a tick for my photographic Big Year, so I scoured the lake carefully.

Half the lake (length-wise) was covered in a thin sheet of ice which meant I was confident I was able to accurately monitor all of the birds on this narrow waterway. And indeed I saw it – a female Scaup swimming towards me with her characteristic white feathers around the base of the bill showing well despite the distance. I started clicking away with my camera and was delighted to see she kept on swimming toward me, closer and closer. Unfortunately, as she got closer my initial enthusiasm turned to disappointment as I realised she was not a Scaup at all, but the far commoner Tufted Duck (the females occasionally have Scaup-like white patches which have undoubtedly led to mis-identification on many occasions). I stood there feeling a little silly as I had taken loads of shots of a common duck. The clues were all pretty obvious:

A – The dark bill tip is more extensive than the tiny dark ‘nail’ present on a Scaup’s bill.
B – I just thought I would point at the confusing white markings.
C – The bird has a tuft for Christ’s sake!
D – The back is too uniformly dark and brown to be Scaup

So I didn’t add to my year-list, but I did get a couple of other shots of birds with Black-headed Gulls almost always getting into the photo…

As it is already the 3rd of January, I should really be out and building up my year-list for 2015, but the weather is so bad I used the excuse to stay in with this one last reflection on birding in 2014.