This year I have got better at snatching short opportunities to bird the patch: still sometimes at the weekend, occasionally early in the morning, and occasionally after work.

The late summer/early autumn migration – my second on the patch – has delivered old friends from fly-over Yellow Wagtail, to the watchful Muscicapidae (and/or Turdidae depending on whose authority you follow) using our trees and bushes as we might use service stations on a long motorway journey: Spotted Flycatcher, Pied Flycatcher, Whinchat, Stonechat, Northern Wheatear, and Common Redstart. 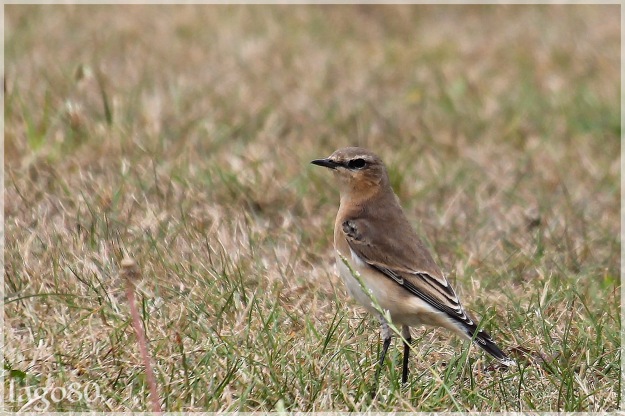 Sometimes the flycatching birds – like those above – are mimicked by normally shyer, more skulking, birds. One balmy evening, the air was so thick with insects that the warblers were out darting out of their usual bushes to catch flies mid-air or chase each other around. Whilst a poor quality photo, it was on this evening that I got some of my best views of our resident Lesser Whitethroat – coaxed out of the thickets wearing its bandit mask to attack the mass of airborne protein:

As Autumn moves closer, some our summer breeders have their numbers swelled by more northerly kin stopping off on their way south: in particular Willow Warbler, Goldcrest and Chiffchaff.

The local birders have all been following mixed flocks with hope and anticipation. The high pitched calls of Long-tailed Tits often the first sign that something interesting this way comes. Moving through the trees, raiding the twigs of invertebrate life as they go with Blue Tit, occasionally Coal Tit (whose distant calls yesterday had Nick and I holding our breath in vain for the hope of Yellow-browed Warbler), and then the comparatively massive Great Tits barging through the leaves like american footballers.

One afternoon in the Old Sewage Works, I watched a particularly large caravan of mixed birds pass by, counting tens of tits along with multiple Chiffchaff, Blackcap, and Goldcrest. I thought that was it, but decided to check with a quick burst of taped yellow-browed and then Willow Warbler. On the second try, almost immediately, up popped a lovely bright bird just a few feet in front of me. I fumbled with my camera like poor old brother Fredo using a gun in the film ‘The Godfather: Part I’ when his father, the old don Corleone, is ambushed while shopping. Fredo’s father is critically injured and he is left facing his own incompetence sat on the side of the road; I was left with photos of a twig where moments before a beautiful had perched just a few metres in front of me. Despite there having been many Willow Warbler through the late summer, I seem to be camera-cursed with them, only snatching this poor shot in near darkness (since my photos of our territory-holding bird in the Spring): 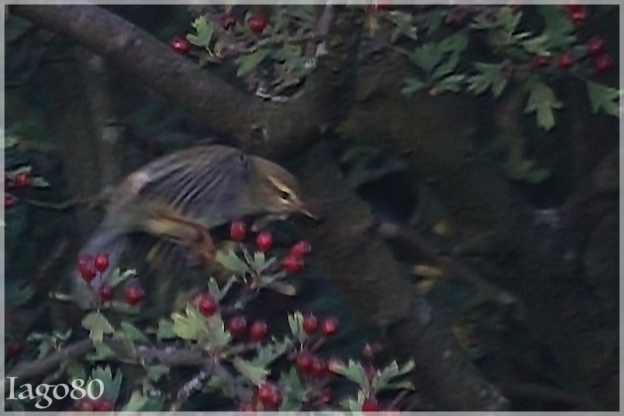 Sometimes my late evening jaunts would mean I literally ran out of light before I had quite finished my birding. And so it was as I walked slowly around our grottiest of ponds, the Jubilee, looking for a relatively long-staying wader. As the sun went down I dodged almost mutantly large rats – fat from the industrial quantities of bread thrown into the pond and rubbish deposited all about (see Jonathan Lethbridge’s excellent post on the problem with this pond, here) – as I continued my search.

After a little while  of searching I eventually saw my quarry through the gloom. It was still feeding on the fringes of the pond island. I scurried forwards to get a photo… the most successful mammal on earth sending the second most successful scurry, in turn, right in front of me and into some undergrowth. I stood right by the rat tunnel to get my shot of the Common Sandpiper, any view of a wader on the patch is a moment to be savoured as they are scarce indeed, just before the light disappeared altogether.

Even knowing the photos would be atrocious quality, I was pleased to have seen this little chap. I walked off into the dusky night  happy, but scratching. Within a few minutes I found a flea on my arm. Within a few minutes more, I had found another. It appears being that close to rats can be rather more hazardous than I had imagined.

Sometimes Autumn doesn’t feel like a season in its own right, but rather as an extended transition between Summer and Winter. Passage migration brings the regular stop-overs and flyovers, and – of course – it sometimes brings something truly special, like this year’s Ortolan Bunting which I feel incredibly lucky to have seen. It also brings gatherings and movements of birds: from mini murmurations of Starlings, to the trickle of South-bound Swallows feeding as they fly, but which have yet to become a great flow.

While some leave, others arrive, like these Wigeon (albeit I doubt these ducks view any of our ponds as their final wintering destination).

Of course, some birds seem untouched and untroubled by the changing of seasons like these two inhabitants of our local river Roding: 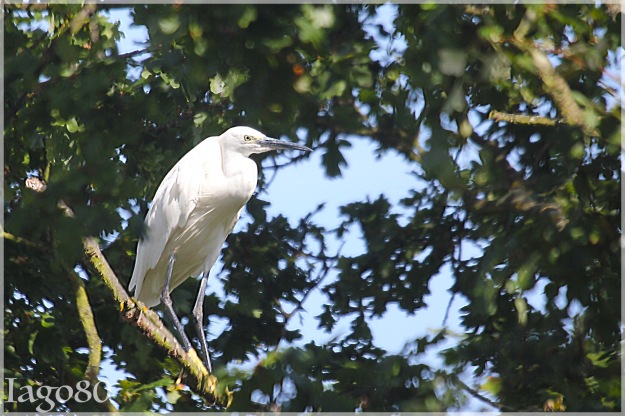 All together, it feels like some ancient astronomical contraption (or Orrery). Different species moving in different directions and at different speeds and orbits, (with some stock still like a pole star) as the single giant cog of time moves inexorably around. Unlike the early scientists observing and turning the wheel, as birders we may observe but there are no wheels for us to turn. Humanity overall is not just an observer though. Occasionally we manage to throw giant spanners in the works. To finish where I started, Whinchat numbers in Britain have more than halved in the last twenty years. As we slow some orbits or break cogs altogether, who knows what damage we are doing to the contraption overall. Will we one day be left with the giant wheel of time turning and no bodies (biological rather than astronomical) to whir around it?

…and then came the pines…

This is a crude description of the order with which our island became re-forested after the last Ice Age eight or nine thousand years ago. As the ice retreated, the trees advanced. In the high mountains of Scotland, the pines were kings. Just about everywhere else, our lands were carpeted with oak dominated woodland. And so the Wildwood became.

To say that we have deforested our ‘green and pleasant land’ would be an understatement of spectacular proportions. Only tiny fragments of ancient forest remain, and nowhere has it been untouched. Nowhere.

But… perhaps the closest we can experience to this original wild woodland is in Scotland. The temperate oak rainforests of the West coast, and the pockets of Scots Pine that remain in the Highlands. I recently visited both.

Taynish and the temperate rainforests

The Taynish peninsula is the westernmost-but-one protuberance on the larger (famously phallic) Kintyre peninsula on the South West coast of Scotland. The main woodland area is dominated by two ridges (one of which can be seen above) and a marshy valley in between (also seen above). Water surrounds. The lochs are fished by Osprey (which I saw there) and Otters (which I didn’t – although I had seen them on Mull the day before).

Shores of Taynish and Loch Sween

This is one of the few areas believed to have been continuously covered in woodland since the last Ice Age with soil pollen records showing only a dip in the Iron Age when man felled some of the trees and again in the 18th-early 20th Century when the woodland was heavily, albeit largely sustainably, coppiced. For the last fifty-plus years the woodland has been allowed to gently revert, edging closer (even if never reaching) its original pristine state.

The woodland is called temperate rainforest because of the volume of rainfall (well over three times the amount of rain that falls in London), the relatively mild climate (as a sheltered peninsula in the South of Scotland), and the number of bryophytes (mosses and liverworts etc) and epiphytes (that grow on other plants also including moss, lichen, and ferns). It actually reminded me more of Cloud forest (that I have seen in Costa Rica, Ecuador, and Peru) rather than rainforest. It is magnificent; I am not sure I have been anywhere in the UK that feels so alive. 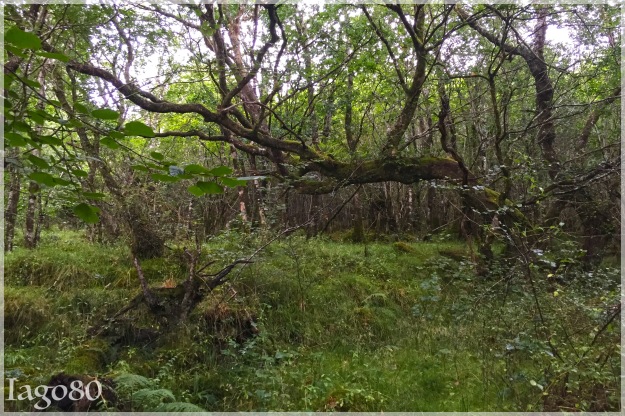 Oak with ferns, mosses and lichens growing on it

The understorey is rich and varied. The diversity of fungi, mosses, lichens, grasses, liverworts, slime moulds, ferns, orchids, and other higher plants was just staggering. 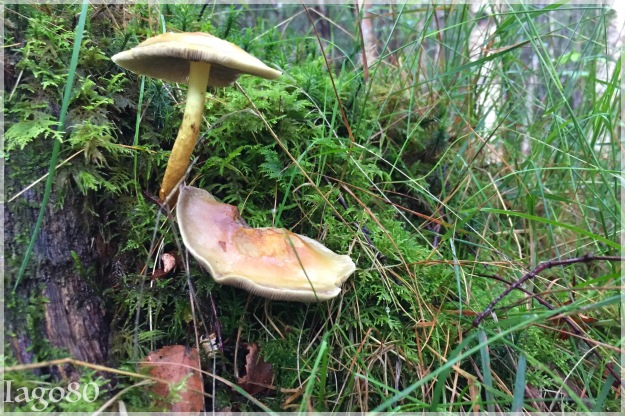 And while I was there, I watched both Spotted Flycatcher, and Pied Flycatcher amongst the tits, treecreepers, thrushes and other common woodland birds.

When out on the heathland and flower-rich carefully grazed areas, I walked amongst more Meadow Pipits than I could count, as well as Lesser Redpoll, Corn Bunting, and Skylark. Apparently Spotted Crake have been recorded here, but they did not show for me. And things get even better when it comes to the invertebrates, with a particularly broad range of butterflies and moths: It is an important site for the Marsh Fritillary, although I was there too late in the year to see them, but was happy with a life first Scotch Argus:

I visited other temperate rainforests along the coast while I was there, and can say with some conviction that it is my favourite British habitat. I was at Taynish on a Saturday morning and did not see a single other person until I returned to my car. I cannot recommend a visit to this area highly enough.

Unless you have seen it, it is difficult to emphasise the contrast between the denuded highlands, or the lifeless timber plantations with the wonderfully rich habitats of true Scots Pine wood. Like the ancient oak woodland, these are tiny remnants of the once mighty Caledonian forest that cloaked much of Scotland until a few hundred years ago.

Unlike the semi-natural linoleum of dead needles that cover the floor of dark spruce plantations, the naturally-growing pine forests are carpeted with an array of ferns, juniper, grasses, and mosses. The understorey is teeming with life.

I came across huge Wood Ant nests, garish fungi, and some rather more familiar life-forms up above the forest floor: 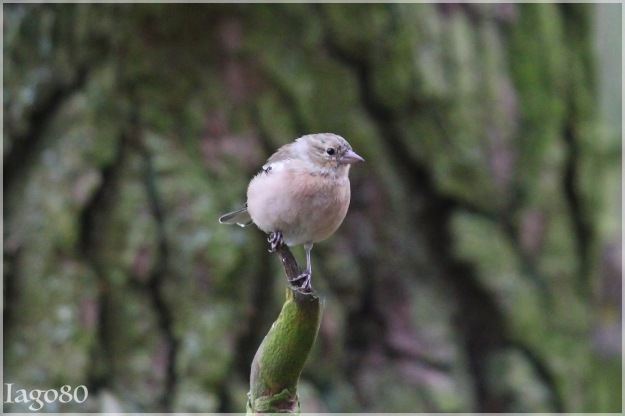 But I didn’t go up to Scotland to see Coal Tit. I had other quarry in mind and I got one of my pine forest ticks at the beautiful setting of Loch an Eilein. 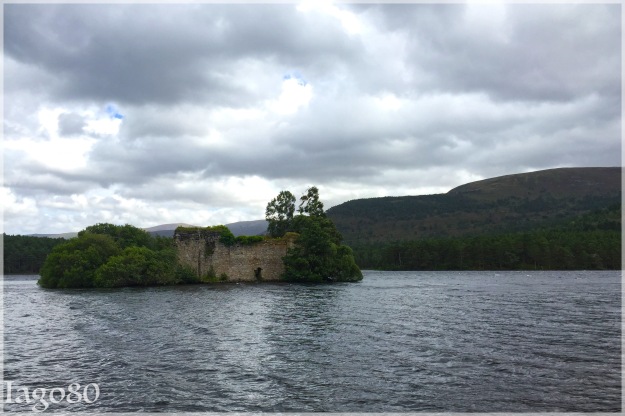 High up in the pines I heard, and then saw, a bird I am used to seeing in the Pyrenees, but had never come across in Britain; the wonderful Crested Tit.

But above and beyond ticking off birds, was an opportunity for me to reconnect with something we have all but entirely lost: our great forests, the wildwood, and quite simply… the wild. My emotional state reflected the woodland I visited; I felt alive. 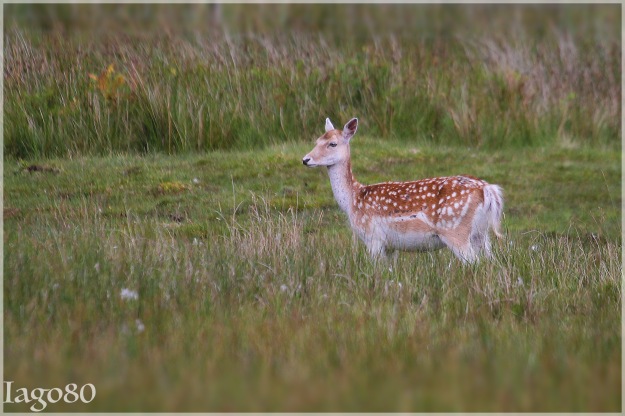