I wrote about my rather low bird lists for 2019 in another post. But in 2019, I also took the first baby steps on a new journey. The journey really has only just begun, but I have so far found it to be rather delighting; becoming a ‘pan-species lister’.

Simply put, pan species listing is recording all species of wild life forms (above bacteria – it generally begins with fungi and slime moulds). You can read more about the rules and practitioners here and an excellent blog by a “big lister” here. There are apparently two people in the UK with lists of over 10,000 species (to get to that kind of level you would effectively need to become a master of all ‘trades’, jack of none, if you get what I mean).

For me, the motivation is roughly three pronged:

One day, I may attempt to go back through old photos and lists and add in things I have seen or identified before, but from the summer of 2019 I simply attempted to record new things that I saw. I got close to 600 species, of which 519 were recorded in the UK. This is not a big number by any means as the scope of things that could be added is vast, but… it was a start, and it was completed in a year when I had a few other… er… distractions.

It has also enabled me to create the mother of all spreadsheets. I am really rather childishly and boastfully proud of it: it has tabs for the different ‘orders’ of life form (e.g., Coleoptera (beetles), Lepidoptera (moths and butterflies), birds etc) and then macros (formulae I have built into the sheets) link through to a totals page that adds everything up automatically by date, location, order etc. I think it is work of art, but not one I am willing to share publicly so I see it as the oiled machinery operating out of public sight and beneath the surface of my records and submissions.

To give a flavour of some of the things I recorded…

I added European Hare (Lepus europaeus) to my French patch mammal list. And those blurry purple flowers are Field Scabious (Knautia arvensis) a species I couldn’t name until this year.

Black-veined White (Aporia crataegi) was another French patch tick, but also a world life tick for me – and what a stunner – I could watch these all day

This wolf spider (Trochosa terricola) was one of many ‘lifers’ for me this year, found on my local patch on Wanstead Flat by David Carr: an amateur but expert arachnologist 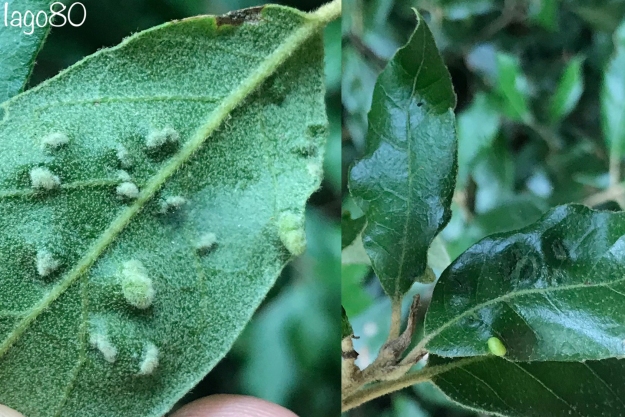 Potentially one of my most important finds of 2019: I believe these galls on Holm Oak (Quercus ilicis) in Dorset are caused by the fly, Dryomyia lichtensteini. If I am correct, this may be a first formal record for the UK.

The ‘irrepressible joy and lightness of being… a communist’ was taken from the radical book, Empire by Michael Hardt and Antonio Negri. It followed a description of the radical nature of St Francis of Assisi. As the patron saint of animals, this phrase seemed appropriate.