Having just returned from two weeks in East Africa (Kenya and Tanzania), my mind is still spinning with the incredible wildlife I was privileged enough to see and experience – I have separated out these two verbs for a reason which will hopefully become clear after you have read this blog post.

People often go on Safari with the hope of spotting ‘The Big Five’ (I was no different). As many people know, the term was coined by the Big Game Hunters of the past (or they certainly should be a thing of the past!). The consensus appears to be that these five animals were the most coveted of game trophies and among the most difficult and dangerous to hunt and kill.

Nowadays, the vast majority of visitors to the great reserves and national parks of Africa simply hope to shoot these animals with their cameras and take the memories of seeing these mighty animals in their wild environment home as trophies. Some are more difficult than others to spot, largely as a result of their increasing rarity (critically in the case of one) due to habitat depletion and poaching.

I feel a great sense of privilege and joy that I managed to see all five animals on my visit. Let me introduce you to them:

The TOP predator in Africa needs no description or introduction. Wherever you live in the world, the Lion has an important place in our cultural psyche and identity. It is the very embodiment of danger and beauty, strength and speed. Every child knows of, admires, and fears the Lion.

Despite being nocturnal or crepuscular (active during twilight), we were lucky enough to see lions on every single day of our safari (I will probably post more pictures in future blog posts). We saw lions relax, sleep, show affection to one another, and eat – including one group of female lions on the Maasai Mara just after a daylight kill. On a couple of occasions, our safari vehicles were within touching distance of these stunning creatures.

I took the photo above of two females on the Serengeti.

This photo, also taken on the Serengeti, was one of hundreds I took of these mighty creatures during our travels. The African Bush Elephant (one of three extant species of elephant along with the smaller African Forest Elephant and Indian Elephant) is the largest land animal in the world.

Elephants are poached for their ivory and also killed by humans for the threat they pose to human life and crops. Seeing these largely inscrutable animals interact as family units amongst the wild beauty of the Maasai Mara, the Serengeti, and the Ngorogoro reserves was an experience I shall treasure all my life.

I took this photo of a male in the Maasai Mara.

Have you ever felt nervous walking through a field of cows? Just be grateful it wasn’t a field of African (formerly known as ‘Cape’) Buffalo. They can weigh more than ten times as much as a large man, run at 56 kph, have horns (and males have skull-plate) that can withstand a rifle bullet, and are known to gore and kill around 200 humans in Africa every single year! No wonder this bovid has never been domesticated. Apart from human hunters, only a group of lions or a Nile Crocodile (when a solitary animal is in water) are a threat to this beast.

I always knew the chances of seeing this elusive nocturnal hunter were slim and so was elated when our eagle-eyed guide spotted this stunning animal up a tree in the Serengeti.

A Leopard has been recorded hauling a 125kg giraffe (twice the Leopard’s weight) nearly 6 metres vertically up a tree! The Leopard blows my mind in every way – seeing it in the wild was incredible. 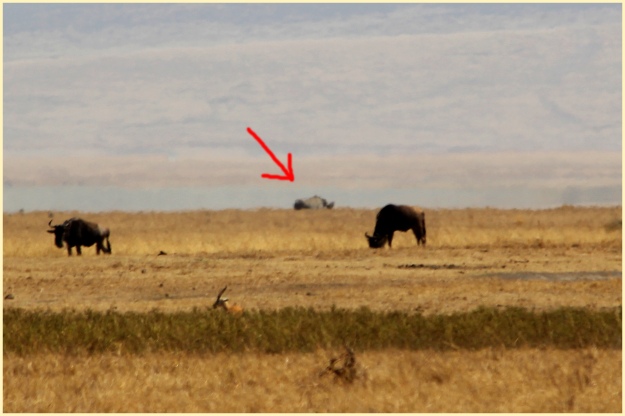 I know what you are thinking: I have posted a hazy photo of distant rock and am pretending it is one of the world’s rarest mammals. But no, I have it on good authority from our expert guides that the distant rhino-shape (this photo was taken at maximum zoom with a 300mm lens) is actually a Black Rhino.

Whilst we can jest about whether I really saw a Black Rhino or not, the chances are that my grandchildren, or even my children, will never even have the chance to see even a distant visage like this. The Black Rhino is listed as ‘Critically Endangered’ – it declined by a ridiculous 96% from 1970 to 1992, and despite huge conservation efforts and some increases from a few years ago, there are still believed to be only four thousand of these creatures left in the wild. The market for rhino horn as an aphrodisiac means poachers risk their lives for enormous rewards. The ignorance and destructiveness of some humans responsible for the demand for this ‘commodity’ makes me feel sick and enraged to my core.

Although smaller than its cousin, the ‘White Rhino’, the Black Rhino is considerably more aggressive. Not even a pack of lions would attempt to hunt the Black Rhino. They will charge at almost anything (including trees) and have the highest rate of mortal combat in the animal kingdom – it is believed that 50% of all male Rhinos will die fighting each other!

In the same spirit, though slightly less well known, Safari aficionados also seek out ‘the ugly five’. I also saw all five of these creatures. So how monstrous are they?

Hyena (in this case, a Spotted Hyena)

Hyenas are widely despised for being ugly scavengers, even as cowardly killers. I believe they should be highly respected. The Spotted Hyena – seen here in the Serengeti – is the most successful and common large carnivore in Africa. They mainly scavenge, but they can most certainly kill, often chasing their prey over long distances, and their jaws can snap through thick bone. Chilling, but admirable!

This is not the clearest portrait of a Wildebeest that I took whilst in Africa, but I think it better conveys what I believe to be the essence of this mighty antelope than a close-up of its supposedly ‘ugly’ face.

This muscular creature kicks up dust with its hooves in the Ngorogoro Reserve, but every years hundreds of thousands of them gallop and stamp their way across huge distances, migrating across the great reserves. I think they are beautiful creatures. 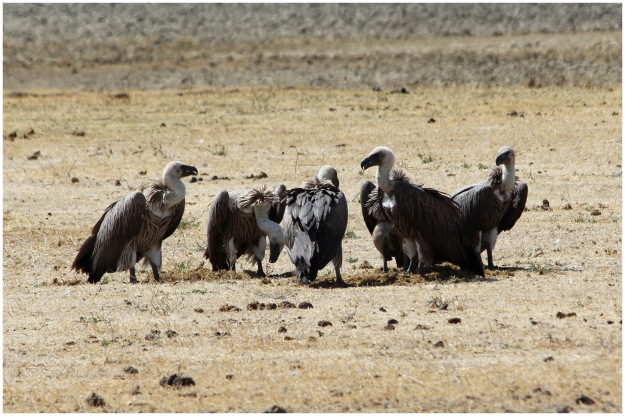 I took this picture of juvenile African White-backed Vultures (let me know if you think they are Ruppell’s Griffon Vultures instead, but I am pretty sure I have identified them correctly) in the huge Caldera of the Ngorogoro Reserve.

Vultures are also successful contributors to a healthy African ecosystem. Whilst I know this gang are not the ‘ugliest’ of vultures, I would question whether they are ugly at all. Anyone who has watched the silent soaring of a vulture on high thermals cannot help but be impressed. Should we really class them as ugly simply because they – very sensibly – have featherless heads? 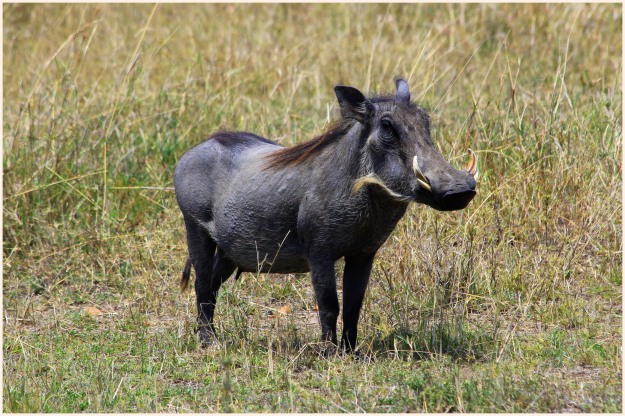 To most wildlife lovers, the Disney-ish anthropomophisim of wild animals is a grave sin, but warthogs really do ooze ‘character’. Watching a family of warthogs zip about the Savannah with tails erect like little flags so that the young can follow them was a fantastic experience. 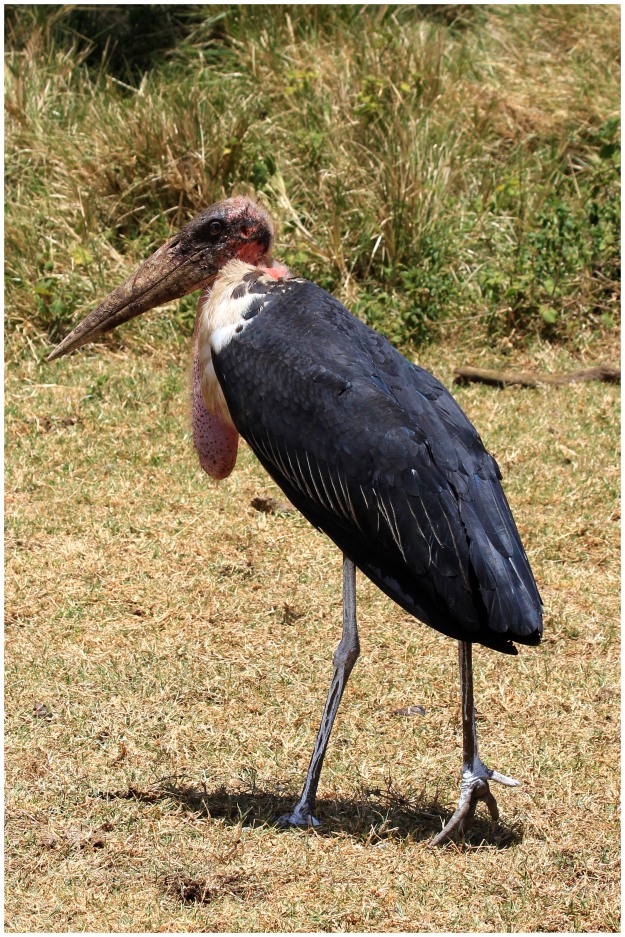 OK! You got me! This really is a face and neck that only a mother could love. Reverting to anthropomorphism again, watching these dudes strut about slowly like ugly old men in suits is a sight to behold.

But anthropomorphism (yes, use of this long word three times in a blog post is excessive) is the point behind ‘the Ugly 5’. Humans see these creatures as ugly, but nature is blind to such petty labels. The five creatures above may not be pride of place on a hunter’s trophy-wall (thank Darwin!), but they all look as they do for good reason in the ultimate display of survival of the fittest that can be witnessed on the great plains of Africa.

Postscript: Five of the rest

Seeking out ‘The Big Five’ was great fun and hugely satisfying, but there really is so much, much more to see than these five great creatures on Safari. Here are just five examples of other fantastic creatures we saw…

Seeing Lions up close with a ‘kill’ on the Maasai Mara, Cheetah cubs playing on the Serengeti, a Serengeti Leopard in a tree were all amazing experiences for me, but I was equally thrilled to see the less well known, but equally stunning, Serval cat padding its way across the burnt fringes of the Ngorogoro crater. 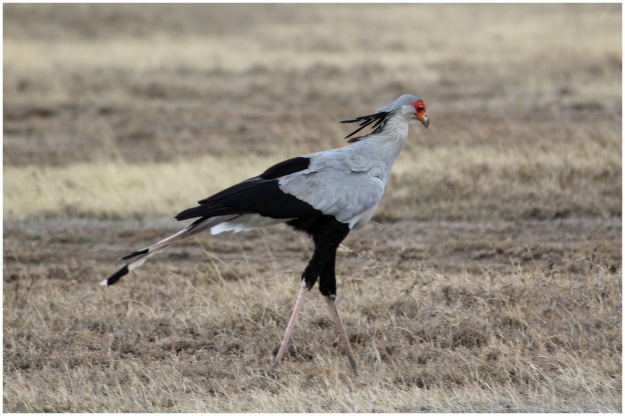 I am lucky enough to have seen the bizarre Hoatzin in South America. Equally weird, but wonderful, is the unique Secretary bird of the African Savannah. This long-legged bird of prey stalks snakes, lizards and rodents across the vast African plains (normally in pairs so it has some company). Apparently the spikey black feathers at the back of its head gave the bird its name as they resemble either the black writing-quills or victorian hair-do’s of antiquated secretaries. 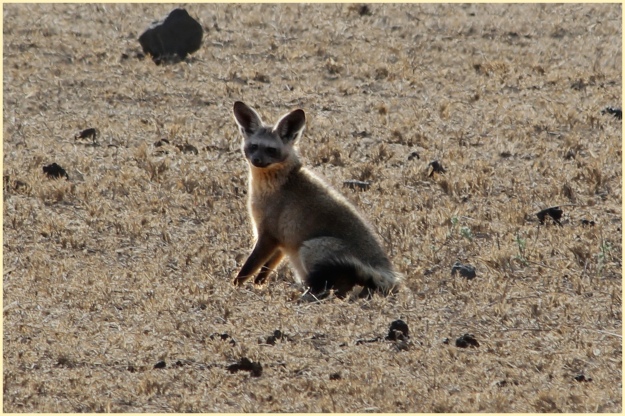 I hoped to see Lions and Elephants and antelope, but seeing amazing and strange creatures like the Bat-eared Fox helped make Safari an incredible experience for me.

You surely can’t blame a keen birder for including this beauty in my list of Safari highlights? I photographed this Crane on the banks of small fresh-water lake and swamp in the Ngorogoro Reserve.

This really was a ‘cheeky monkey’.

We spent a few days relaxing in a five-star beach resort on the Unguja island of the Zanzibar Archipelago after the relative ‘roughing it’ of camping on Safari, but for me the Safari did not end. As well as seeing numerous gorgeous bird species, I was lucky enough to get up-close and a little too personal with a very rare monkey indeed.

The Zanzibar Red Colobus is endemic to Unguja island. Just to stress, that means it exists nowhere else on earth. Its ideal habit is the Jozani forest reserve (where I first saw one) which at 50km sq is nearly 300 times smaller than the Serengeti National Park.

In between a massage (overlooking the Indian Ocean) and a post-massage smoothie being brought to me (yes, I am spoilt and bourgeois) this monkey dangled down to us from out of the branches of a tree, repeatedly turned his backside and flashed his genitals at us, and then casually climbed back up his tree again. From his leafy viewing post he was repeatedly mobbed by crows (pecking him and biting his tail) whilst he brushed them away with lazy swipes of his hands.

Overall, I think you can probably tell I enjoyed myself rather enormously on Safari. I realise that re-living other people’s holidays can be rather boring, but for those of you long-suffering enough to click through to my blog-link frequently, I intend to post further Safari-themed updates. 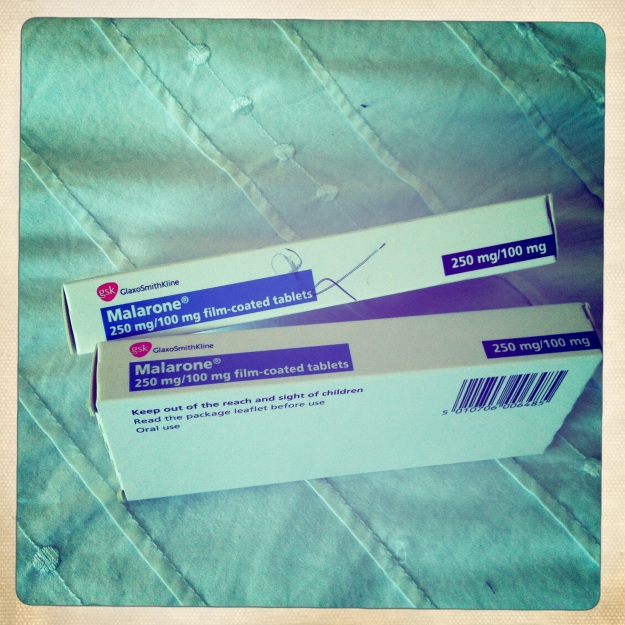 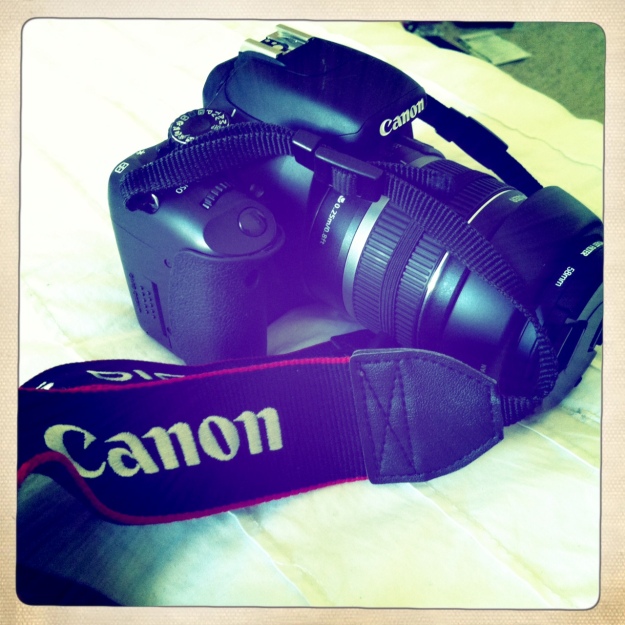 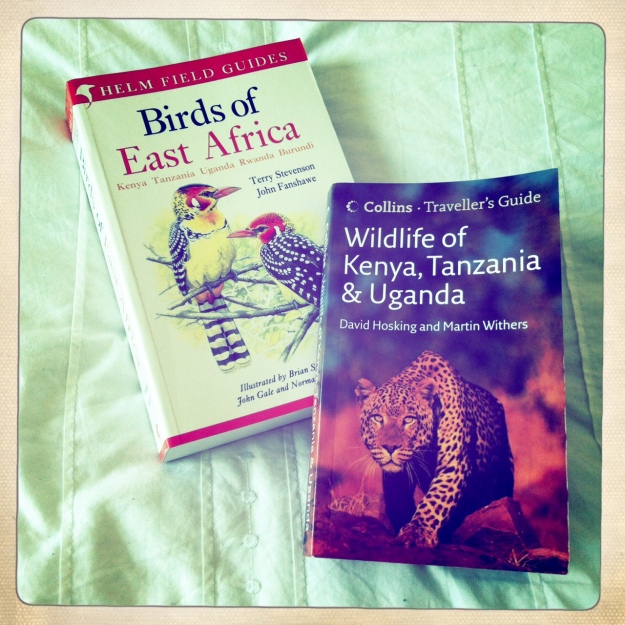 This can mean only one thing…

We are about to go to Africa on Safari!

When I return I shall bore everyone stiff with thousands of photos of distant specks which I shall claim are Leopards, or Hyena, or Giraffe. You have been warned!