It was the best of times: a shrike on the patch! The first Great Grey Shrike on the patch in 39 years. I wasn’t even a twinkle in the eye when the last one was seen. And, I’ve never even seen one (I’ve got three species of shrike on my lists and ‘Great Grey’ ain’t one). Brilliant! Except…

It was the worst of times: I didn’t see it.

I had been out the night before and may have had a drink or two. I missed the calls from Jono alerting me to the Shrike, and woke up too late. It had gone. A fantastic find by Tony and well deserved, but devastating to dip.

Nick and I searched hard, but didn’t find it. There were points on my walk around the patch when certain bushes seemed so promising as a shrike-perch that I almost built myself up into a frenzy of expectation and optimism. But it was simply not to be.

I hit a low searching the patch of grassland known as the Forbidden Triangle, which resembles the Bermuda Triangle in that anything with wings that might visit the area disappears and is never seen. But even that was not to be the nadir…

I scraped the barrel by walking into the City of London Cemetery. It was like Piccadilly Circus at the gates with flower stalls doing a roaring trade from the bereaved and hearses gliding past with large entourages. I looked at the three  roads stretching away in-front of me which, then, in turn, split again like some fractal nightmare of labyrinthine infinity, and I just gave up. I nipped between a processional cortège like a green-clad funeral crasher, and escaped back out of the gothic gates without having seen so much as a robin.

By the time I reached Wanstead Park, my optimism of finding the Shrike had all but evaporated.

My mood was poor as I entered the wooded darkness of the dell. I knew I was leaving any likely habitat for a Shrike-stopover.

But as I entered the woodland, my funk was pierced by what sounded like a thousand ultra-high-pitched whistles. As the trees encircled me, it felt like I was surrounded by legion invisible Goldcrest. And, albeit not quite literally, I probably was. Our resident reguli (I feel like Alan Partridge insisting on referring to the plural of his car make as ‘Lexi’) have been swelled enormously by Eastern passage migrants.

It was the age of wisdom: In a better frame of mind I began to see things that were there, rather than hoping to see something that was not (profound no?!). And those things were mostly of a fungal nature.

Autumn can so easily seem like a season of death. But with death comes decay, and with decay comes a bloom as impressive as any Spring floral display. I was surrounded by mushrooms, toadstools, and slime moulds.

… to the truly minute (I found caps that were just a few millimetres in diameter). 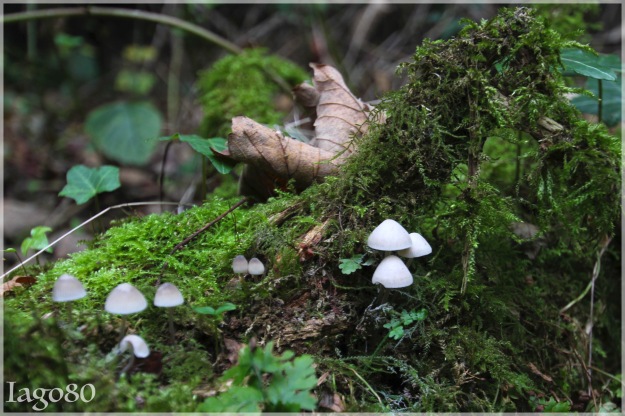 I found and photographed at least twenty types of fungi. Exhilarated at the prospect of looking them up and listing them somewhere, I longed to thumb through my tome of Collins Fungi Guide and tick off everything I had seen. But the reality was to be somewhat different.

It was the age of foolishness: The Collins guide illustrates over 2,400 species of fungi. It boasts that it is the most complete field guide available, although there are believed to be well over 17,000 species of fungi growing on the British Isles. I hopelessly failed to accurately identify anything – even with photographs and a guide book.

Other than having a broad sense of fungal families seen: Inkcaps, Parasols, Chanterelles, Agarics and the like; I flailed with the scale and similarity of the possibilities. The very fact that this blogpost is posted somewhat ‘after the fact’ (to take a line from Eminem) is a clue to the reality that I spent two nights flicking between photo and guide picture largely fruitlessly.

It was the epoch of belief: I realised once again what many birders have noted before; birding in Britain sits in the ‘Goldilocks Zone’ of wildlife hobbies. Enough variety and variation for challenge, but not so much that it becomes a hard science rather than a pleasurable hobby. There are about three hundred species of breeding and regularly visiting birds in the UK, and about three hundred more possibilities of scarcities and vagrants.

It was the epoch of incredulity: Compared with 17,000+ British fungi (it is believed that science has named less than a tenth of the fungi in existence on earth: likely to be in excess of a million species), birding is positively ‘Duplo’-like simplistic fun. I know there are people who will  examine gill filaments and spores of a fungus under a microscope, or indeed the genitalia of a moth, for the sake of identification, but… I prefer birding: “definitely a Chiffchaff. It just went ‘chiff chaff‘”.

It was the season of light: Being in a somewhat philosophical frame of mind off the back of my fungal forays (and still blissfully unaware of the ID enigma I was to encounter at home) I did my best to cheer Nick up over a couple of pints of beer at our patch pub (and failed rather miserably – Nick finds more on the patch than most of the rest of us put together, but was clearly gutted by the GGS dip). [OK! I realise two birders drowning their sorrows is hardly an embodiment of the ‘season of light’, but I have committed to this ‘Tale of Two Cities’ theme now and I am damn well going to see this extended metaphor through to the bitter end! The pub is the ‘Golden Fleece’ after all (although the nearby ‘North Star’ would’ve been even better for my story)]

It was the Season of darkness: [This one’s back on track] The next day was so foggy, that attempting to identify any birds on patch was tricky and photography was virtually useless…

Reed Bunting (Emberiza schoeniclus) in broom in the fog

“…it was the Spring of hope, it was the winter of despair…”

It was the Spring of hope: I whirled around the Flats from dawn to check in case our shrike had come back or come out of hiding. But to no avail. My Sunday of hope lay elsewhere: on another patch a few miles down the road (or down river to be more precise)…

A mere stone’s throw from the stone barges of Rainham, a little warbler was skulking around in some bushes. Another local birder, Shaun Harvey had played a blinder (almost literally) and found London’s second ever Dusky Warbler from its “took” or “teck” calls. Most of the Wanstead crew piled over on Sunday morning, along with many other birders to congratulate our neighbouring patch-worker and pay our respects to the diminutive dark phyllosc.

I stood in the twitch line looking at the tangle of gorse, nettle, bramble, and ‘thorn occasionally hearing the odd call from deep in the vegetation. A ‘tick’ from the ‘teck’, so to speak, but I wanted at least a glimpse as well. A Robin, a Wren, a Dunnock, and a Reed Bunting all popped up every now and then to show us how easy it is for a bird to perch in full view while our Asian visitor stayed resolutely hidden.

But eventually, through fence, branch, stalk, and twig, I got a view of an eye under a distinctive supercilium peering out from its thorny bower and then that brown phylloscopus-body moving between twigs. That is how life ticks are made.

It was the winter of despair: Winter is indeed on its way, and the season of crazy passage vagrant arrivals will soon be over, but it is no time for despair. For every fungus that cannot be ID’d, there will be another that can (maybe with practice); for every bird that is dipped, there is another that can be ticked. And with both comes a story to be told, even if not quite worthy of a Dickens novel.