The Isle of Sheppey in Kent is not everyone’s choice destination. It has a reputation for being a little rough – so a good friend who was born there tells me – and one in twelve inhabitants on the island is an inmate of one of the three prisons. 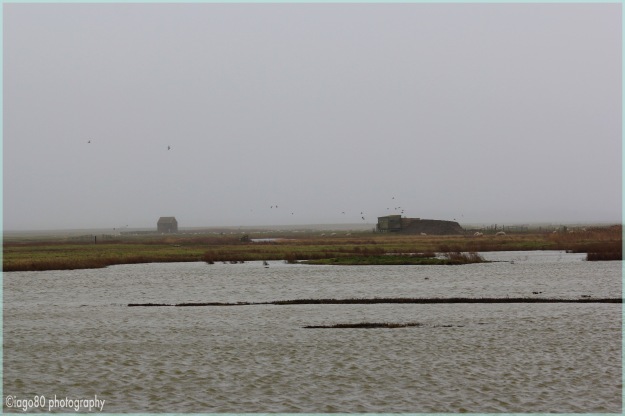 A winding road takes you a few miles driving through the marshes where you can spot wildlife from your car window – the closest I have experienced to safari outside of Africa. I got remarkably close to hundreds of Lapwing:

Although, I didn’t get quite as close, it was from my car window that I saw my 50th species of the year:

Whilst not a new bird for my list this year, I did feel slightly voyeuristic photographing mating Greylags from my car window (the same couple is captured below in several different … er… positions)…

Once out of my car, things were a little less pleasant. The wind made it difficult to walk and the rain drove into me horizontally and stung my face. But I walked for a couple of miles (it felt like twenty) and pulled my camera out from under my coat a few times to capture some truly magical wild moments…

A racing hare sprinting around bemused and occasionally startled sheep:

And then, I saw the 52nd species of bird this year, the amazing and rare Marsh Harrier, a male (one of only about 350 pairs in the country) seen below flying low and pouncing on unseen prey:

I also saw a female harrier being harried by a lapwing…

Whilst the weather was about as inclement as it gets in the UK, the benefit was that I was all alone in hundreds of hectares of wild land. All alone, that is, apart from the wildlife. 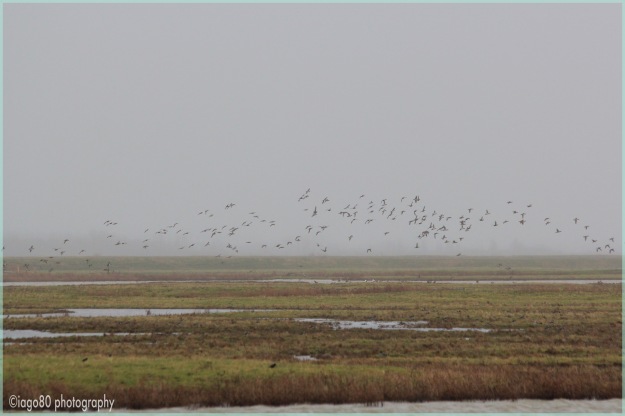 This weekend, tens of thousands of people will have spent an hour counting the birds in their gardens for the RSPB’s Big Garden Birdwatch. I joined them, as indeed I did last year .

I also got to tick one more bird off my year list to take me to a grand total of 49. The 49th species I photographed is one of the most hated birds in the UK: the Feral Pigeon: 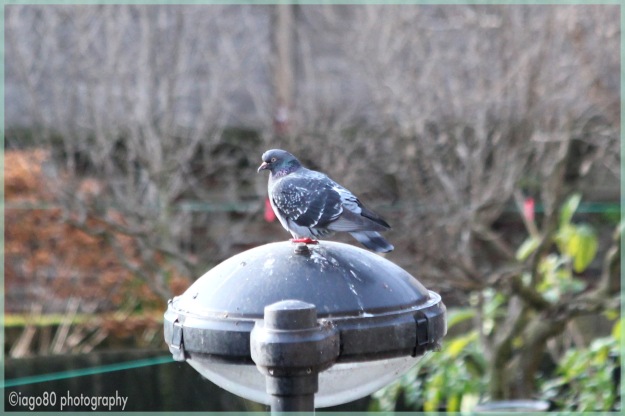 Many people refer to the feral pigeon as a rat with wings. I don’t completely disagree with the comparison, as, like the rat, the feral pigeon has thrived in a world dominated by humans (let us not forget that humans do incomparably greater damage to this planet than all the so called ‘vermin’ put together). A few other things about feral pigeons that you may or may not know:

Anyway, there ends my lesson, but as you can see, I don’t believe we should hate these natural survivors as much as we often do. Now, back to the listing…

I counted 3 feral pigeons together at one time in the garden – according to the RSPB rules – to count them for today’s birdwatch which I submitted online to feed into the organisation’s enormous database. This was one down on last year.

I counted two Blackbirds – a male and female – which is the same as last year: 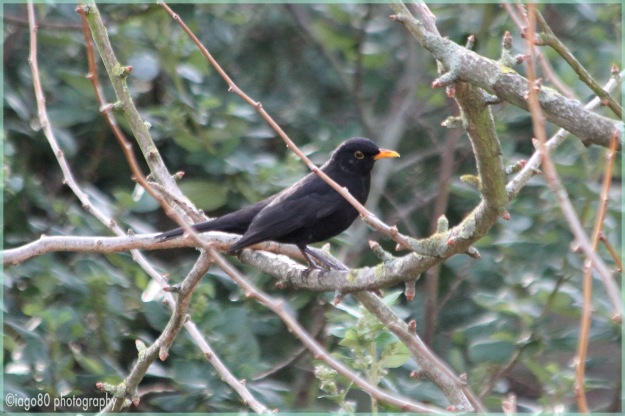 One Wood Pigeon (down from three last year):

One Carrion Crow (I didn’t see any this time last year):

Strangely, I only saw one of the normally highly gregarious Long-tailed Tit (two this time last year):

At least one Chaffinch (one less than last year): 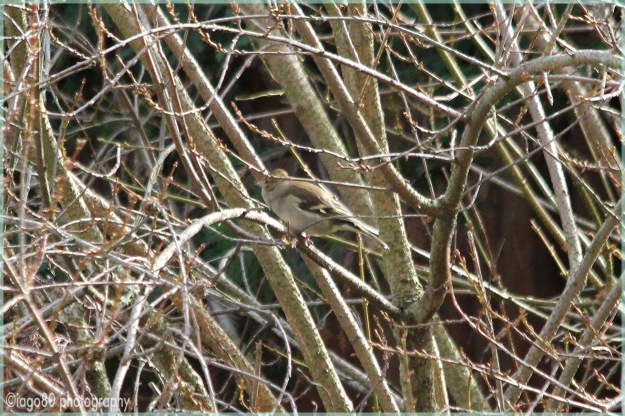 One Wren (which was missing from my hour last year):

And, finally six Starling (which improved on the solitary one I saw last year – although the photo is significantly worse!): 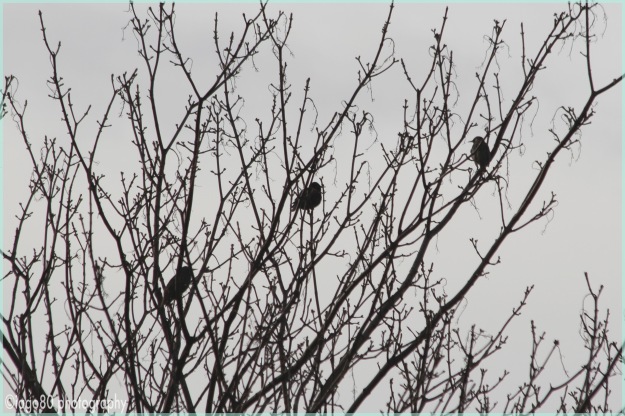 To really get my numbers up for BBB, I visited one of my favourite sites just out of London: Rainham Marshes.

It lived up to its name, as it was impossible to walk all the way around without Wellington boots or getting very wet feet following the floods. But I did manage to see 17 more species of birds to get my numbers up to 48 for the year so far. This included some very common species I just hadn’t managed to photograph yet since 2014 began, such as: 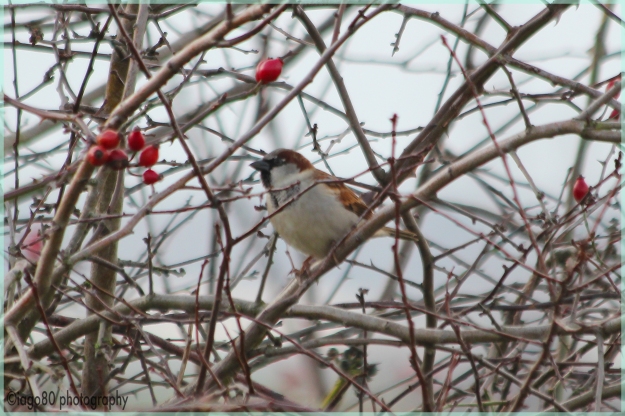 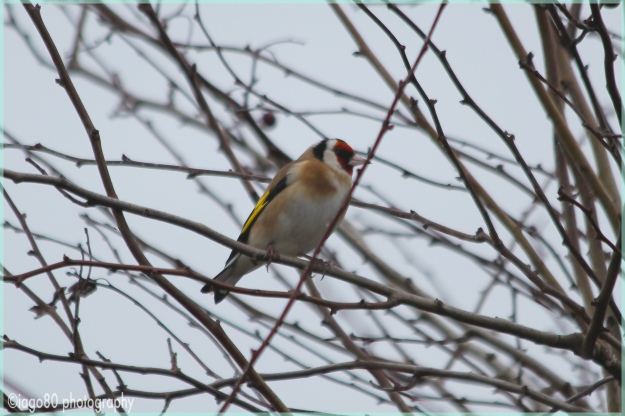 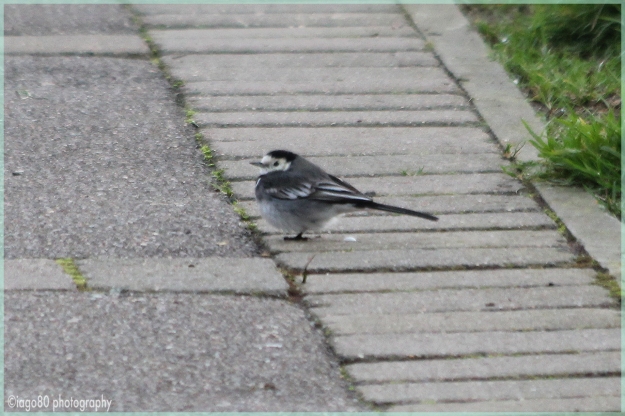 I also saw some fascinating behaviour from other common birds, such as great flocking activity from the thousands of Starlings found at Rainham: 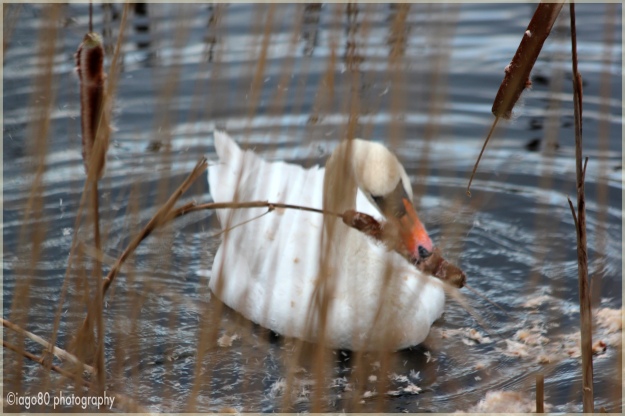 Scanning the sky, I caught: 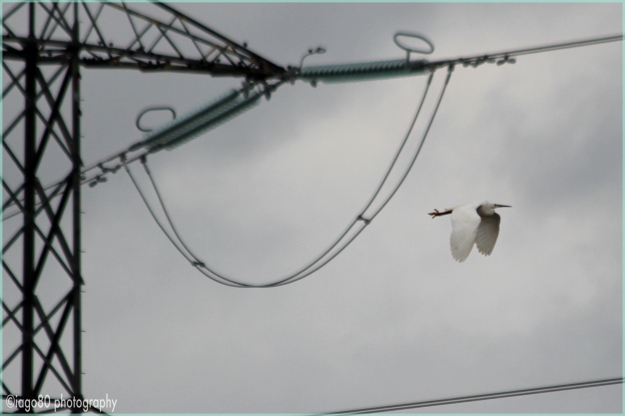 As is often the way, the most interesting (or rare) birds I photographed were often taken at enormous distances or were heavily obscured such as the merged two shots of a single male (top) and pair (bottom) of Stonechats: 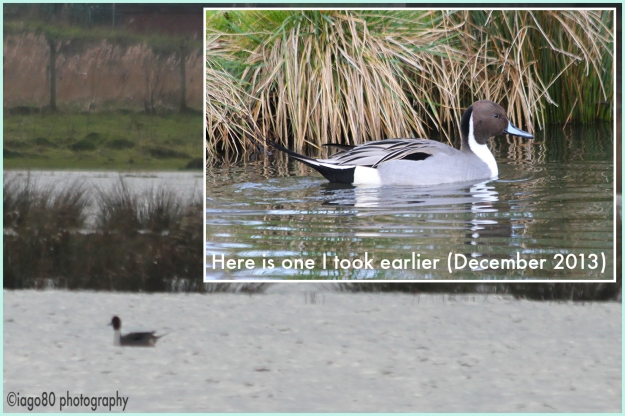 Rainham marshes is only a couple of big deluges away from succumbing to the mighty Thames estuary which runs right next to it:

The seawall is covered in plastic and other detritus, and I was incredibly lucky to photograph both Meadow and (the rarer) Rock Pipits (left and right respectively on the collage I have made below):

And finally, I was very pleased to capture the rare -ish (around 2000 breeding pairs in the UK) and incredibly shy Cetti’s Warbler. The explosively loud warbler is one of the most recent arrivals to the UK; first recorded breeding in the UK in 1973. Unfortunately, I only got heavily obscured shots like the two merged below: 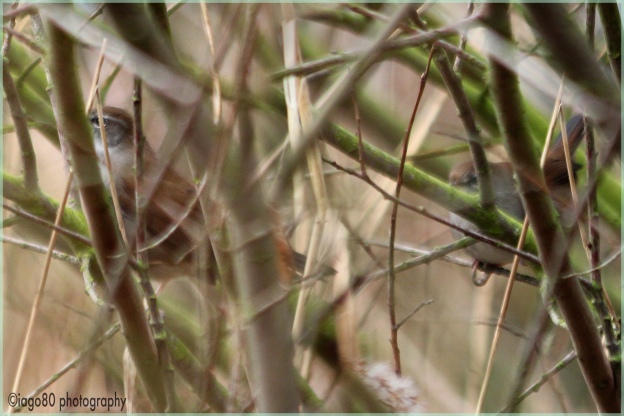 My journey to photograph as many species of British birds in one year as possible took me to ancient London woodland yesterday.

Queen’s Wood in Haringey is small – around 52 acres – but important. It is a recognised wildlife hotspot in the capital and contains rare species of tree (I shall perhaps return in warmer months and write more about these) and insect as well as supporting large numbers of birds.

Queen’s Wood is a fragment from a much larger wood that used to cover much of Northern London and Essex and it may be directly descended from the truly ancient Wildwood that covered most of Britain following the last Ice Age.

It is allowed to grow in a relatively unrestricted manner, although there is some tending using some surprisingly traditional methods to carry the logs:

But, I went to photograph birds. I was pleased to add four new species to my 2014 list: 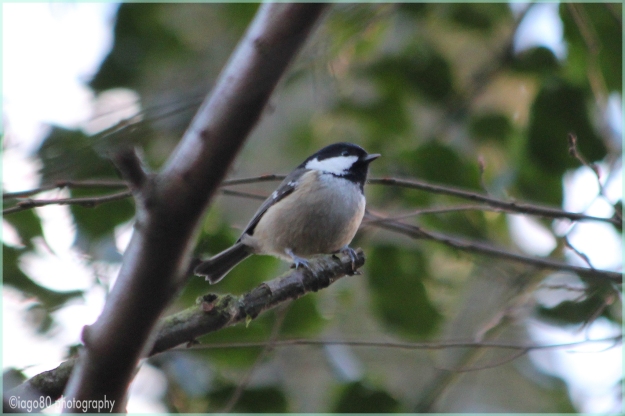 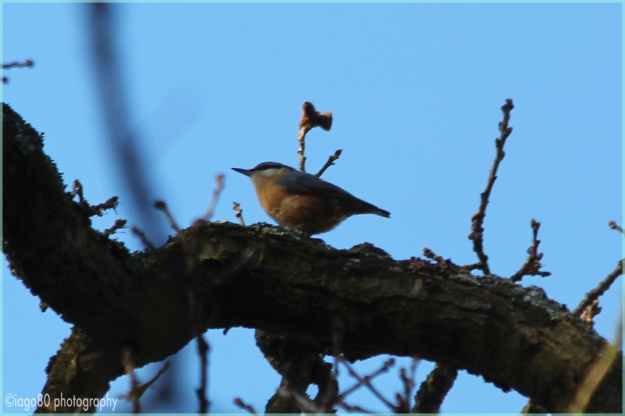 … and finally, I photographed one of the three species of Woodpecker known to reside in the Wood (the same bird is pictured twice below, amalgamated to show different aspects, as it was always partially obscured – an occupational hazard when photographing birds in woods):

There were other birds there that are already on my list from last weekend including an exceptionally tame Robin:

… and, lastly, I couldn’t resist this shot of a Grey Squirrel:

After two weekends into the year, my total stands at 31.

Jessica (Rosamund Pike): I thought you agreed to wait to do another Big Year.

A ‘Big Year’ is an informal competition amongst birders to see or hear the largest number of species of birds in a year. It mainly exists in the States and the record for the US is held by Sandy Komito with a staggering 748 species from 1998. They even made a film about it with Owen Wilson playing Kenny Bostick, who is very loosely based on Sandy, alongside Jack Black and Steve Martin.

I plan to photograph as many species in Britain this year as I can and will publish them to this blog as my own little Big Year.

I started yesterday and clocked up 27 birds in the day (inevitably almost every day afterwards will be a smaller, and decreasing, number(s)). Along with the Parakeet above, I got the following:

The first ducks I photographed in 2014 were a pair of Wigeon:

The problem with counting birds I photograph is that, sometimes, the quality of photograph will be awful (see the shot of a pair of snipe below for evidence). To avoid this becoming too tedious a list of poor shots, I have created some collages below: 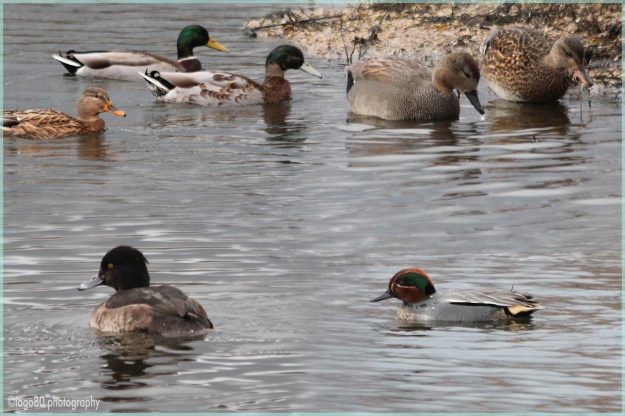 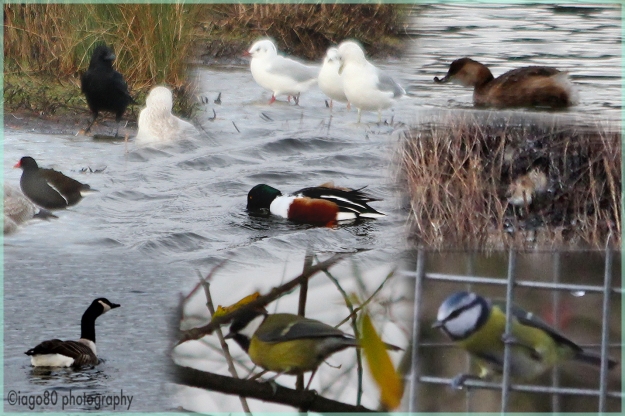