A trip to Elmley Marshes in Kent just over a week ago allowed me to get pretty close to a Wheatear:

A Yellow Wagtail landed on another post almost as close but flew before I could point my lens at it. On the Safari-style drive out of Elmley, I found another feeding next to a cow:

Elmley rarely fails to deliver a Marsh Harrier and my latest trip was no exception:

As I have described before, the vast, beautiful, but bleak wetland stretches out to become farmland. I took the photo below in March last year to show (just about) a Peregrine perched on a post outside of a barn:

Peregrine in front of barn

I looked back in the same direction on my latest visit and found a Common Buzzard perched in a similar place to the Peregrine 17 months before. I focused my telescope on the Buzzard and it promptly took off. Any birder will know how hard it is to track a moving bird at high magnification, but I more or less managed it. Suddenly there was a flash of white in my eye-piece and I momentarily thought that Buzzard had somehow grabbed a passing gull. The Buzzard and the white bird tussled and span in mid air. It wasn’t a gull though, it was a Barn Owl. As I focused on the mid-air scrap, the Barn Owl seemed to be the better off and had clearly initiated the attack on the Buzzard. The birds parted and the Barn Owl flew back into the large window hole shown in my photo above of the barn. It had clearly taken umbrage at the Buzzard’s presence so close to the barn. I have no photographs of this rapid and distant incident, but it is a memory that will remain etched in my mind.

I walked back to the car park and past the Wheatear again on a slightly different post and now bathed in the golden light of early evening:

The photos are not exactly Jonathan Lethbridge standards, but I was pleased with them nonetheless.

As I left the reserve, the air was thick with Hirundines. Mainly Swallows, but also House and Sand Martins.

By the time I was turning out of the reserve I glanced to my right and saw that they had concentrated in a meadow where they almost swarmed quite possibly in their thousands.

I drove off a happy chap and went deeper into to Kent to visit a friend.

Kent: Part II
The following day, my friend and I drove out before dawn to Oare Marshes. The fantastic reserve juts out into The Swale – the thin strip of sea (despite appearances it is not a river) that separates the Isle of Sheppey from the Kent mainland:

I had read about recent sightings on the Kent Ornithological Society website where a Messr Wright had written that, “The regular Hobby was in the lone Elder west of the road as usual first thing.” As we arrived in the pre-dawn gloom I looked west of the road and, sure enough, there was the the little falcon in the tree as described (excuse the poor phone-scoping):

We walked along the sea-wall and identified a number of waders on the muddy flats of the Swale including Curlew, Dunlin…

Winter plumage Dunlin (Calidris alpina) on the right with unidentified wader to the left – it could be another Dunlin, but the bill looks more Knot-like to me

As we turned down to face the Oare Creek, I saw two small terns fly past in the distance. I am at least 80% sure that they were Little Tern, birds I have only seen before in France, but they were just a little too distant for me to reliably give myself the UK tick.

Back inland, the actual Oare Marshes were coming alive with activity. Soon after we arrived, around 400 Black-tailed Godwit flew in:

Some of the Black-tailed Godwit (Limosa limosa)

Aside from the ‘Blackwits’, there were snipe, little egrets and Ruff:

Essex
Yesterday I drove North of the Thames into Essex to Vange Marsh:

Vange Marsh marked ‘X’ with Oare as ‘Y’ and Elmley, ‘Z’ with the River Thames in between

I drove with a specific purpose. It was my first Essex twitch. A Wilson’s Phalarope has remained there for a few days. The rare American vagrant was just too much of a pull to miss, although soon after my arrival a hunting Marsh Harrier almost made sure that nobody else got to see this rarity. Luckily it survived the swooping attack.

After the long walk to the site, the frenetically-feeding tiny wader was just identifiable through the scope at maximum magnification: 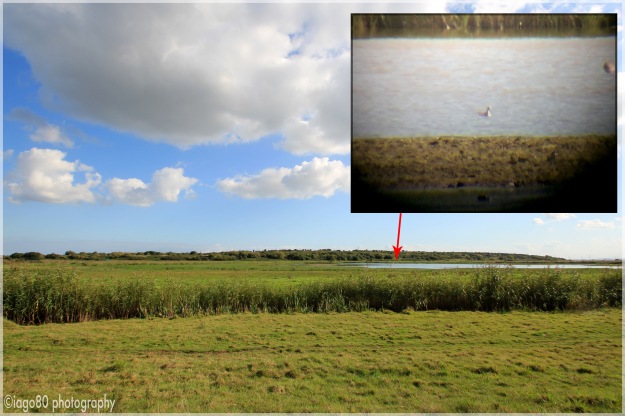 Before screwing your face up too much at the shoddy image, please note that this bird is little bigger than a thrush, is almost a quarter of a mile away and is photographed through an iPhone pressed up to a scope eyepiece!

Distant it may have been, but that is a great rarity to have seen barely 40 minutes drive from my house. Stay tuned for more twitches likely in the future.

My trust scope and the rest of ‘the twitch’

“The teeming hordes are sweeping, swirling round” The Teeming Hordes – Mallory Patrick

There is a sense of ‘movement’ amongst many of the migrant birds on the patch as we enter the Autumn passage time.

Some of our Summer visitors are leaving, and others are bunching up in bigger numbers as those on passage from further North stop off to refuel.

The rather poor shot of a Chiffchaff above was taken in the low light of early morning. Yesterday I came across a flock of Chiffchaff at least 10-20 strong with a few Blue Tits and Great Tits tagging along for the ride (rather than the usual other way around). Chiffchaff breed across the patch, but the current numbers have swelled considerably.

Nowhere near as numerous, but also increased from very low number(s) during the breeding season, are Willow Warbler. The photo below has been puzzling me somewhat – the general colour and brightness point to it being a Willow Warbler and the legs look pale, but … the supercilium is annoyingly narrow and nondescript and as I didn’t hear it call or sing, I can be relatively confident, but not 100% certain, that it is not an aberrantly bright chiffy: 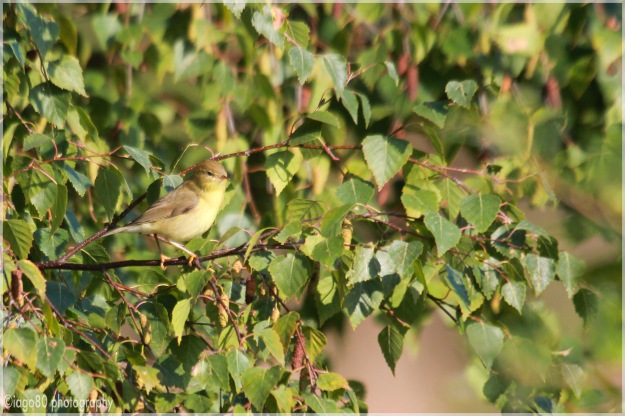 Spotted Flycatchers have been an excellent feature bird on the patch for the last few weeks and numbers seem to fluctuate as they pass through. Yesterday I watched as three tussled and fought with each other, zipping from tree-to-tree in the highly productive area called ‘The Enclosure’. I even filmed one for a bit, calling and then flying off (excuse my shaky camera work): click here. 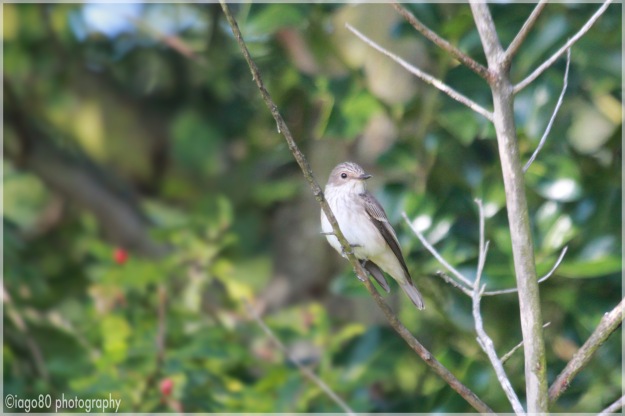 Spotted Flycatchers have been seen at numerous locations across the patch although the majority have been found around Long Wood and the Enclosure, reflected in this map of my personal sighting locations (each dot represents a rough location of sightings, not individual birds seen):

Thanks to City of London for the map

South of Long Wood are the brooms and grassland famous for our breeding Skylarks, but more recently the brooms have been alive with Whinchat. Six or seven have been recorded on particular days and have been popular with the local and visiting birders: 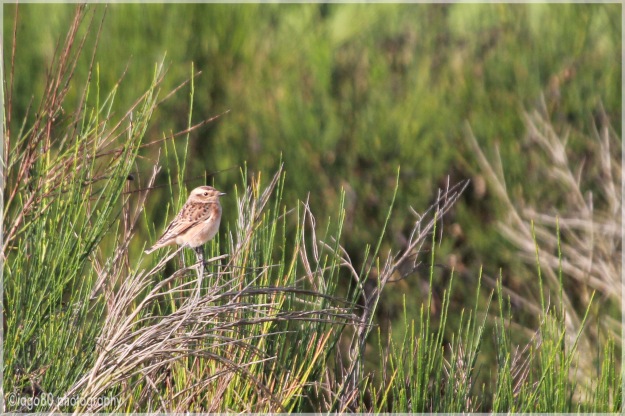 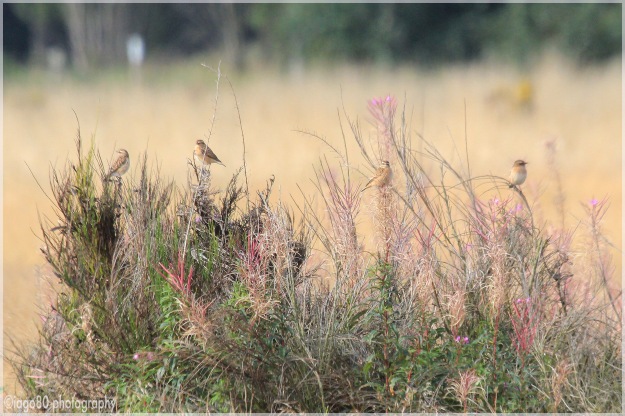 Four Whinchat in a bush

Even more popular than the Whinchat are the slightly less common Wheatear:

With a blurry crow for size comparison

In the last few days I have rectified my lack of Yellow Wagtail on my patch list and have now seen a few pass high over. Meadow Pipits and several types of finches can also frequently be heard high above. But the numbers of all of these pale beside the hirundines; the sky has become increasingly busy with waves of Swallow, Sand Martin and House Martin:

Today the Wanstead Birders counted up to 1000 Swallows pass over the flats.

Just as the summer migrants are leaving or preparing to leave, some of the familiar winter avians are starting to return from northerly climes or their coastal breeding sites, such as this Common Gull:

Migrants come and go, but much of the wildlife remains on the patch… 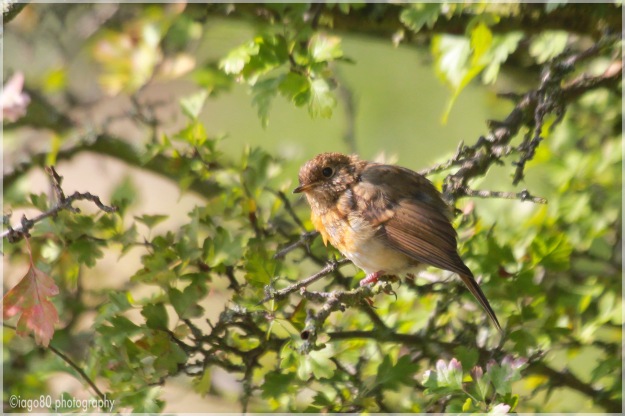 With the onset of Autumn, the local fungi has been blooming all over the place: 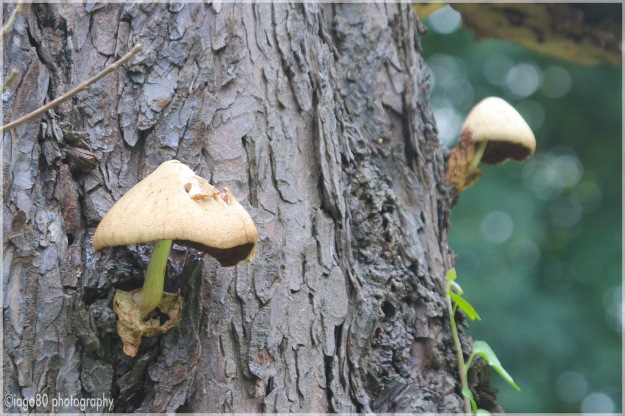 A different type of late bloomer is this naturalised Cyclamen found in Bushwood:

August and Early September has been great on the patch, but I am particularly looking forward to the return passage of the Ring Ouzels which I missed in the Spring.