The birds of the Corbieres are a bit different from East London (I don’t often see a Griffon Vulture sail over the house or a Bee-eater perch on a telegraph pole in Leytonstone), but the butterflies are just another world. I don’t especially mean the different species, although there are many different species from those I find in London, but the diversity and the sheer quantity is just a world away. 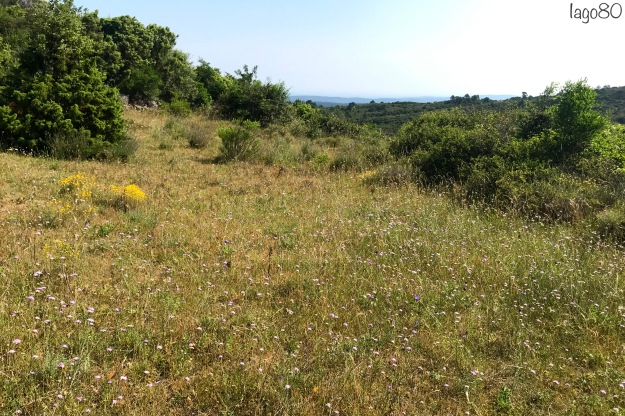 We hear increasingly about the decline of butterfly numbers and I have certainly been taken aback by a seeming paucity of butterflies on the wing recently. I can stand in prime  habitat locally and sometimes not see any butterflies at all for a minute or two. In the Corbieres, they are everywhere. Every step I took on the land would send several flapping away to safety. I am not massively used to it because I don’t often visit in June or July and so found it almost breathtaking on this most recent trip.

I have recorded 43 species of butterfly within a short walk of the house and I expect, if I broaden my visits across Spring and Summer dates, I should hit 50 without too much bother; there was certainly a lot of underlap from a trip in August a couple of years ago.

On this trip, some species were everywhere: Meadow Brown (also probably the commonest summer butterfly back in Wanstead), Iberian Marbled White, Southern Gatekeeper, Silver-washed Fritillary, and Grayling were almost ubiquitous.

The area benefits from many of the butterflies you would expect to find in France as well as being in a strange geographical comma that extends a number of Iberian semi-endemics into this sliver of Southern France. The False Ilex Hairstreak is a good example of this.

A highlight for me was finally seeing Black-veined White. Their wings look like slices of translucent ivory or mother-of-pearl.

The blues gave me some ID challenges, but were fun such as this Escher’s Blue…

I have pasted in my full patch list below in case of interest.