The Maquis is a fictional terrorist/paramilitary organisation in Star Trek (DS9, TNG, and VOY – if you don’t know what these abbreviations mean, you probably won’t want to know) that has been formed to fight against the Cardassian (think quasi-fascist, sharp witted, scaly aliens)/Federation (the ‘goodies’ in Star Trek) alliance. They are roughly based on…

The Maquis were a terrorist/paramilitary organisation in France and (later) Spain fighting against fascist Nazi-dominated Vichy France and later the quasi-fascist Franco regime. They were named after the type of terrain they were famous for occupying and carrying out their activities…

The Maquis is a shrubland biome/ecoregion, that, along with the even scrubbier garrigue, is recognised as typical mediterranean habitat. It happens to be a major feature of the land in my birding ‘patch’ in the extreme South of France.

Maquis on the patch, with a hunters’ track carving through it

Rather like the barren uplands of the UK that many, who haven’t read George Monbiot’s ‘Feral’, perceive to be the epitome of British wilderness, people are mistaken in thinking that  this is ‘natural’ or ‘original’ (whatever that word means in evolving ecosystems) Mediterranean habitat. Hundreds and thousands of years of agriculture has deforested (and then inevitably de-soiled) the land leaving it only fertile enough for stunted and hardy plants to grow.

On steep hillsides where soil erosion has been most intense, the Maquis has diminished to the extent that it resembles alkaline garrigue biome:

Sometimes the vegetation is further cropped by a herd of voracious mouths whose bells give away their presence long before you see them:

But in other parts of the patch, less affected by agriculture or, at least less recently affected, a natural process of rewilding is occurring and thicker, denser, taller forest is returning (looking much closer to how the land would have looked before the spread of human civilisation and agriculture) – impenetrable apart from wild boar paths and where the hunters’ tracks carve through the landscape like giant ochre scars:

It is fascinating to observe how the wildlife changes depending on the subtle variations of maturity of the Maquis. Inevitably, the thickest woodland, often on steep slopes, is the hardest to monitor, but is well populated with Short-toed Treecreeper which occasionally break out of the woodland and make an appearance closer to the house: 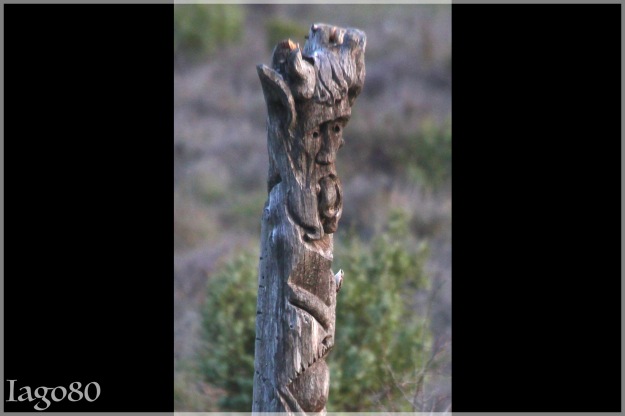 It seems – certainly in Spring when they call and sing a lot – that Firecrest is the most common bird on the patch. As long as there is a bush or two, Firecrest are common throughout every level of vegetation: 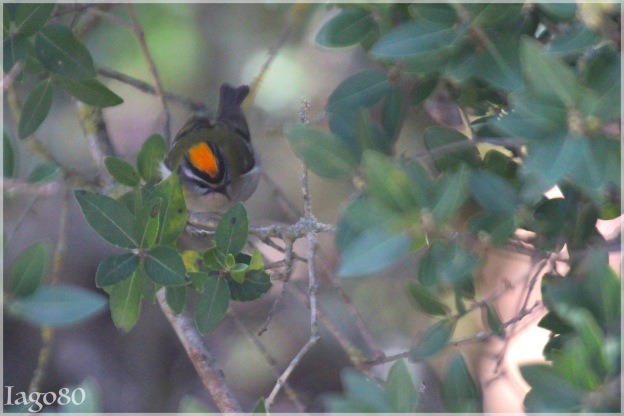 Firecrest with crest on full display

Sardinian Warblers are present throughout the year in the bushes, and had started singing – occasionally even conducting low flurries of song-flight before disappearing back into their bushes (often Kermes Oak I have noticed). By the time we had arrived in late March, the Subalpine Warblers had arrived in large numbers. In Spring and Summer, they appear to be the most numerous warbler, overtaking their resident sylvian cousins, the sardis.

If the Subalpine and Sardinian warblers take the 1st and 2nd spot, Chiffchaff (which had also arrived in March) must be number three: 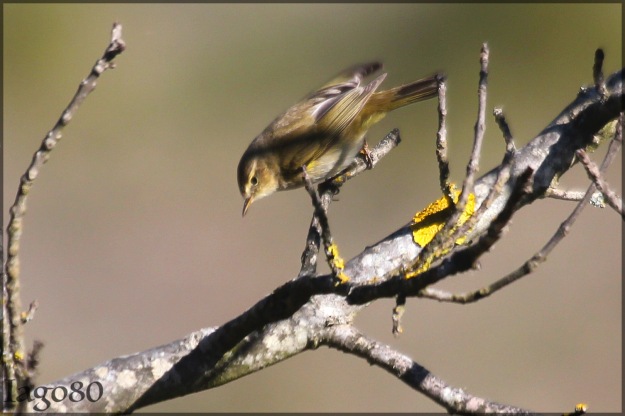 I would allocate the fourth podium (when is there ever a fourth podium?) back to the sylvians with Blackcap – some of which probably overwinter closing off the warblers I saw whilst there for a couple of weeks early this Spring.

Melodious Warbler, a relatively common summer breeding bird on the patch had not yet arrived even by the end of the first week in April (incidentally, neither had our watch of Nightingales).

Great Tits and Long-tailed Tits seem to love the variety of Maquis vegetation, whilst Blue Tits are frequent, but less common. Crested Tits will occasionally show themselves in the Aleppo Pine woodland on the hill, but I didn’t find any on this trip (higher up in the Pyrenees, they are everywhere!) And, of course, where there are lots of tits and other small woodland birds, you inevitably also get: 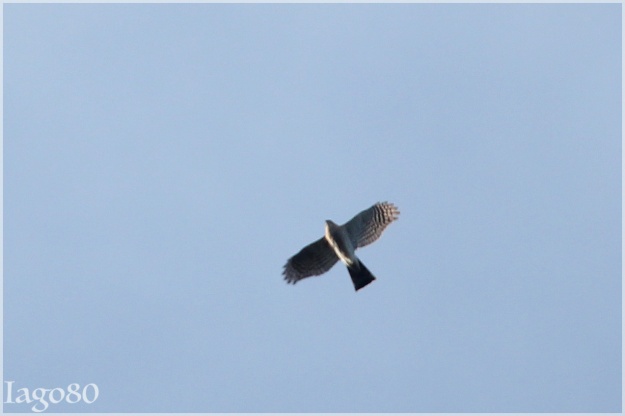 Sparrowhawk is common, but perhaps not seen as frequently – in season – as Short-toed Eagle: 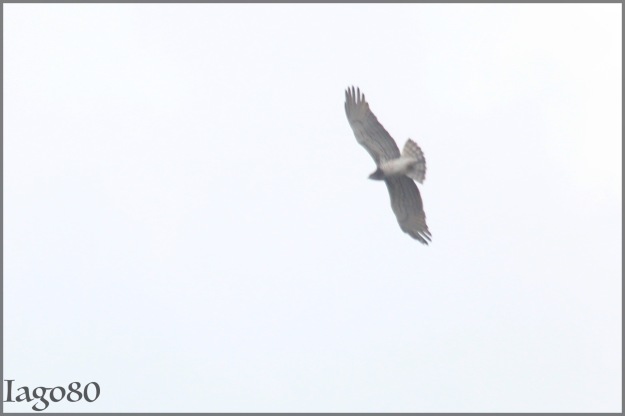 Sadly I did not see any Hen Harrier on this visit to the patch (although I did see one elsewhere in France) as they are true masters of the Maquis scrub.

Whilst the maquis may help dictate the type of avifauna found, almost anything can soar above it. On this trip I was genuinely thrilled to see a pair of Golden Eagle soaring effortlessly over the hills:

Just as oblivious as to what vegetation is on the ground, was my first patch crag martin.

Falling back to earth and thinking back to the Aleppo Pine, a rather unwelcome resident is the Pine Processionary Moth, or rather its caterpillars which march nose-to-tail across paths like blind mice. The hairs on this caterpillar can cause extreme irritation – especially if inhaled or if blown into your eyes. Allergic reactions to this have proved fatal for dogs and other animals. The caterpillars feed on pine needles, and if infested with multiple nests, the de-nuded trees might become susceptible to other forms of parasitic attack, but research shows that they are not quite as damaging to trees as some fear. I would also love to see research on the strength of the silk they weave as their nests are phenomenally tough:

In more open areas of the Maquis, different birds seem to thrive.

Cirl Bunting are common and flit between bushes and trees to deliver their fast rattling songs, but I was even more pleased to find Rock Bunting for the first time on the Patch:

Occasionally, on walks, I would push through the spikes of Juniper or Kermes Oak bushes (almost everything on the patch has a defence mechanism) and flush some ground dwelling larks. On my patch in London, Skylarks are the feature bird, delivering their famous songs from high in the sky and often rising and fluttering down almost vertically. In the French patch, Woodlarks fill this niche and perform their songflight in great circling loops.

In the most open areas – on paths, meadows, and lawns near the houses, the Black Redstart is king. I find the male’s song quite extraordinary, sounding like crushed gravel after a bunch of initial whistles. They breed in the houses and ruins:

Occasionally, the clearings and paths attract the stunning Hoopoe. This time I stopped the car to take photos of it on the track in to the house:

Overall, it is a fascinating privilege to watch the birds utilise different aspects of the varied stages of maquis development, and to watch the land slowly, but inexorably rewild.