The mixed blessing of going out birding later than I used to, due to family time, is that I get a good sense of whether the Patch is likely to be productive before I set foot outside.

This morning, it did not bode well and so when I heard news that Rich Bonser had found a Great Reed Warbler at Crossness in South London: a full-on UK tick for me, it was a no-brainer. A lot of my patch colleagues shared that they needed it for London, but it was only when there that I learned this was actually the first ever for the LNHS recording area.

I left the house at 09:50 and had to be back at 12 as we were hosting a lunch for our NCT baby and parent group; it was a race against the clock. I planned it out in my head: 35 minutes drive there, 35 minutes drive back, 15 minutes from the car to bird and the same back would give me 30 minute to locate, hear and hopefully see the bird.

The walk across the meadow took me back to my last time there, in February when I went for the Penduline Tit. It is a great site: a pair of Peregrines were circling each other as I arrived, and there were Cetti’s, Reed Warbler, Sedge Warbler, both Whitethroat species, Skylark, and much more all in full song.

I was amazed when I finally got there that I was only the third birder there and the finder, Mr Bonser was luckily still there. I heard it almost immediately – that distinctive deep croaking that sounds like one of those wooden ‘guiro’ musical instruments and then the louder and gruffer version of the Reed Warbler‘s song.

But the bird stayed well hidden behind a large bramble bush in the reeds as we watched through the metal fencing to keep everyone from the ‘protected area’. We were treated to my best views this year of Sedge Warbler while we were waiting for the star bird to show. 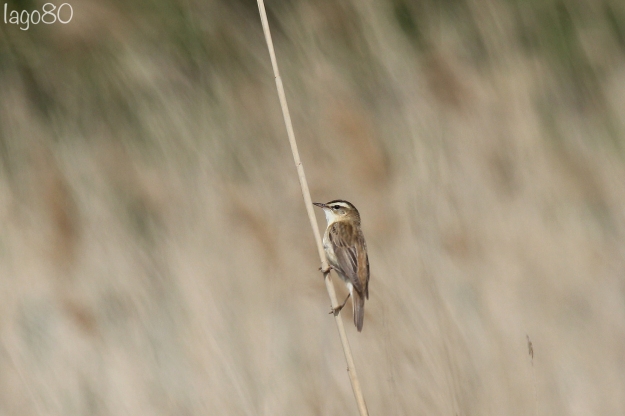 Eventually, the thrush-sized Acro popped up on top of the reeds some way from where where we had heard it singing after it chased a smaller bird. There were many better photos taken later that day, but ticking a bird in London that is also the first time anyone else could have ticked that bird was special.

belting out its gruff song

I was in a very good mood, albeit partially dampened when the Satnav told me it was going to take closer to an hour to get home. Slightly late, but, I think, with a pretty good excuse.

As it was car journey solely to twitch a bird, I made a small contribution (as per my new pledge) to a charity to protect some rainforest.

I only recorded 56 species of birds in four patch visits during February. Of the 56, three were new for the year for me. 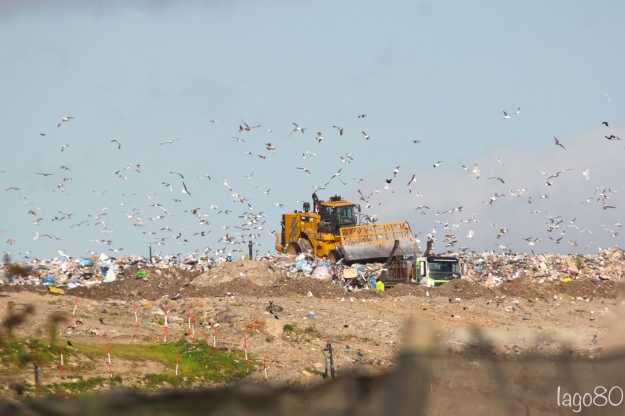 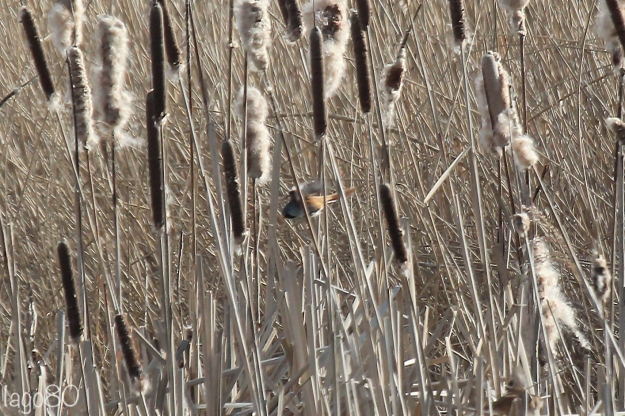 But such is the pull of birds. Such is the ‘twitch’. And this wasn’t just for a year or London tick, this was for a full fat life tick: Bonaparte’s Gull. But oh boy did this diminutive larid give a couple of us the run-around on Sunday!

One benefit of the walks was seeing the Roding at different stages of Thames tidal-flow; an easy comparison of just how radically different it makes the place look. This is a photo I took a couple of months ago at low tide:

And this was almost the same view (slightly different angle) taken on Sunday at high tide – this had nothing to do with the flow of the Roding, which was similar on Sunday to the flow in the photo above:

By the time I arrived, the finder of the American vagrant gull, Paul Hawkins, was leaving, not having seen his his bird for about fifteen minutes. This didn’t bode well.

Those of us there studied every Black-headed Gull present carefully, and twice, and then probably all over again. Luckily some of the guys I was with are truly excellent gull specialists and helped point out the first cycle Yellow-legged Gull which was a year tick for me and I would have almost certainly overlooked were it not for them. 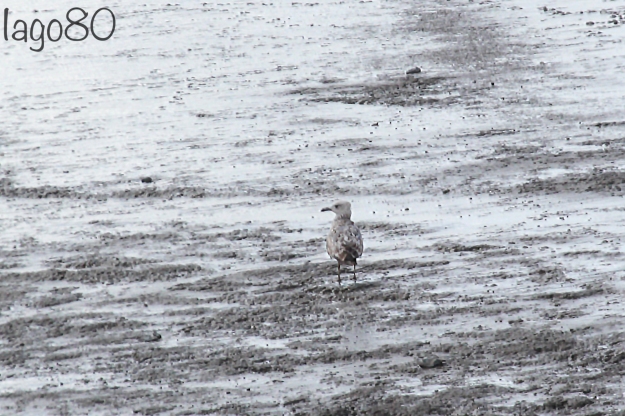 Nick, Marco and I even drove for twenty minutes to get a view from the other side of the Roding, a mere 100 metres away as the gull flies, but with no extra luck.

After some driving around the dystopian mini-rust-belt that makes up the Barking dock area, I headed back to give my wife a lift to the airport. Fast forward a few hours and I heard the Bonaparte’s Gull was back and was soon-after joined by a young Caspian Gull (another potential year tick). Nick and I missed both by a matter of minutes. Super!

I consoled myself marginally with the sight of three very cute Shelduck chicks.

The expert view was that our best chance of finding the main prize (only a few are seen in the UK each year) was to try down-river and on the other side of the Thames. A mere forty minute drive and twenty minute walk (please inject sarcasm if not apparent) despite being just a few flaps of wings even for a small gull.

As Nick and I marched down the south bank in the early evening light we had the extraordinary sight of over a hundred terns (we presume mostly or all Common Tern) but didn’t really have time to scan or photograph properly so you just get this iPhone shot of about thirty of them. I have certainly never seen that many tern in London before.

From one sewage works to another, Nick and I finally arrived at Crossness and scanned the Thames around the sluice mouth. 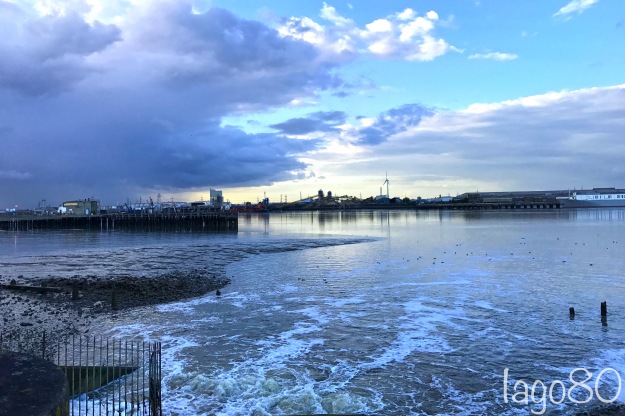 Thames from Crossness with rain clouds to North-West. The Bonaparte’s is one of those dots

There were only a couple of dozen black heads to look at this time, and it was only a couple of minutes before I was exclaiming that “I’ve got it!” All the driving, and walking, and scanning, and sewage smells were worth it. My life first Bonaparte’s Gull and an important tick for Nick’s big London year list quest as well:

As any American readers will know very well, the Bonaparte’s Gull is the third smallest gull in the world (I had ticked off the smallest, Little Gull, just a couple of weeks earlier). It is named, not after the similarly diminutive French emperor – which was my assumption – but his exploring ornithologist nephew, Charles Lucien Bonaparte. 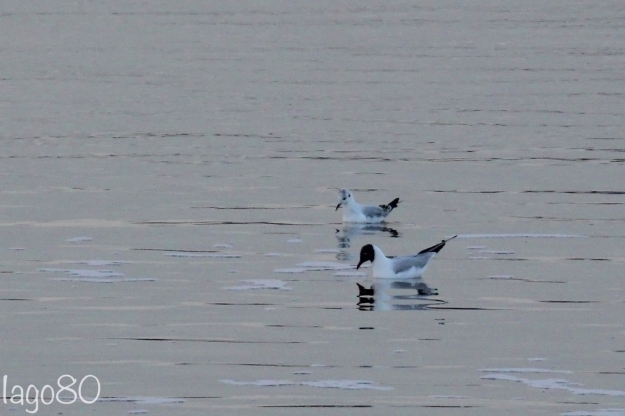 Bonaparte’s at the back just about showing overall size difference and dainty bill compared with Black-headed Gull in the front (Chroicocephalus ridibundus) and different stages of moult obvs!

I was thrilled, and the walk back to the car after a long day of driving and walking, seemed like the shortest yet. I was even in a state of mind to enjoy the sunset. 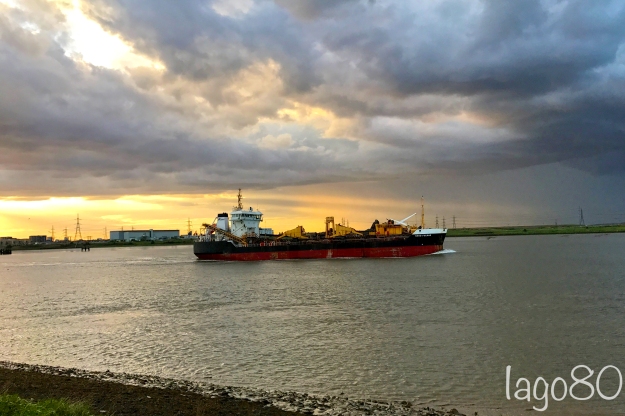 The twenty-year-old, 100m long hopper dredger, Sand Fulmar, on its way to Southampton*

*Not that I’m a secret ship-spotter you understand!