Being away from the Patch when the Autumn passage migration begins is never easy. It is made easier by having the privilege of a second patch in a different country in which to holiday.

Common Redstart has been seen again in the East London patch; a bird I hope to catch up with when I return. But I can’t complain. On the French patch, Common Redstart are also migrants, but they stick around and breed over the summer rather than just pass through as with London.

I love redstarts: they are stunning birds with bags of character and are relatively bold affording us with great views. Sadly, the only bird not showing fantastically well was the mature breeding male – the best shot I managed was this:

They will soon head back to Africa. However, their similarly red-tailed relatives, the Black Redstart – that have also bred successfully – will stick around as they are full year residents. The family that breed year after year by the house beat their ‘common’ cousins as being the most showy of the patch birds.

It has been great to watch young birds be fed, learn to feed themselves, and grow. Other birds visibly doing the same thing on the French Patch have been Stonechat – with immature birds perching up every now and again, and several of the resident and migrant-breeding warblers. The most successful sylvians here have always been the Subalpine Warblers and I have spent hours this trip watching families of this warbler making the most of the early autumn berry bonanza to supplement their invertebrate diet. 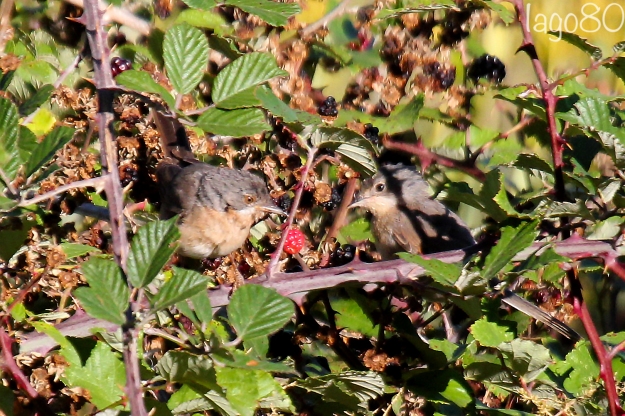 There are, of course, several other breeding birds on the French Patch that have not proved as easy to observe. August can be a tricky month in that respect as birds are so quiet – there has been very little song. In fact, it can lead one to – sometimes incorrectly – conclude that birds have already migrated. I have only had brief views of Chiffchaff, Willow Warbler, and Melodious Warbler with barely even a call out of any of them. 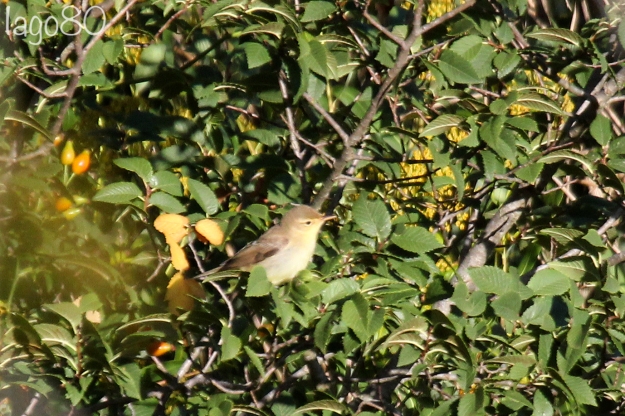 In may and early June the land is alive with the song of prospecting and protective males of multiple species. Most beautiful, of course, is the Nightingale. I haven’t seen a single one of these notoriously shy songsters and had concluded they had left for the South when I was treated to a few grating calls and even a short burst of sub-song from deep within the scrub.

There are also some more exotic migrants which I will return to in a different post.