I made 9 patch visits during November and recorded a total of 70 species of birds (exactly the same as October). I added two new birds towards my patch year total (now a record for me of 110) and both were full patch life ticks.

My birding month in five pictures

Not much of a photo, but this the first time I managed t photograph Redpoll on the Patch

Another poor pic, but Black-throated Diver was the rarest bird of the month

Short-eared Owl at Rainham – always a pleasure to see

Dipping the Bittern at Rainham

The day began – late – by joining most of my patch colleagues in dipping Leach’s Petrel standing in a small park overlooking the huge William Girling Reservoir.

Birding on reservoirs is often hard in its own right. When you are attempting to see birds when you can’t even get close to the reservoir, I find it verging on impossible. At one point we attempted to see a Great Northern Diver from this spot but looking at a reservoir further north (to the right and out of frame of this picture); but you know something is hard when you hear quality birders say things like “I think I’ve got the GN Diver in my scope, but it might just be a Great Crested Grebe“!!

So Nick and I swapped one set of large reservoirs for another. This time the dreaded Staines Reservoirs. I have blogged about them before as they are my nemesis location; everything I have ever gone there to see (most recently White-winged Black Tern) I have dipped; a 100% failure rate!

After sitting on the M25 for what seemed like half the day (possibly because in total, it was for half the day!), we arrived to see the Shore/Horned Lark*. Whilst it had previously been seen and photographed up close, it was now distant on the western shore, but it was a successful twitch for me at Staines. The curse is finally broken. I even rather foolishly attempted to take a record shot with my camera and phone-scope respectively below: Looking straight at the camera (albeit across a reservoir)

The South Reservoir has been drained and looks extraordinarily bleak, with just small pools left. 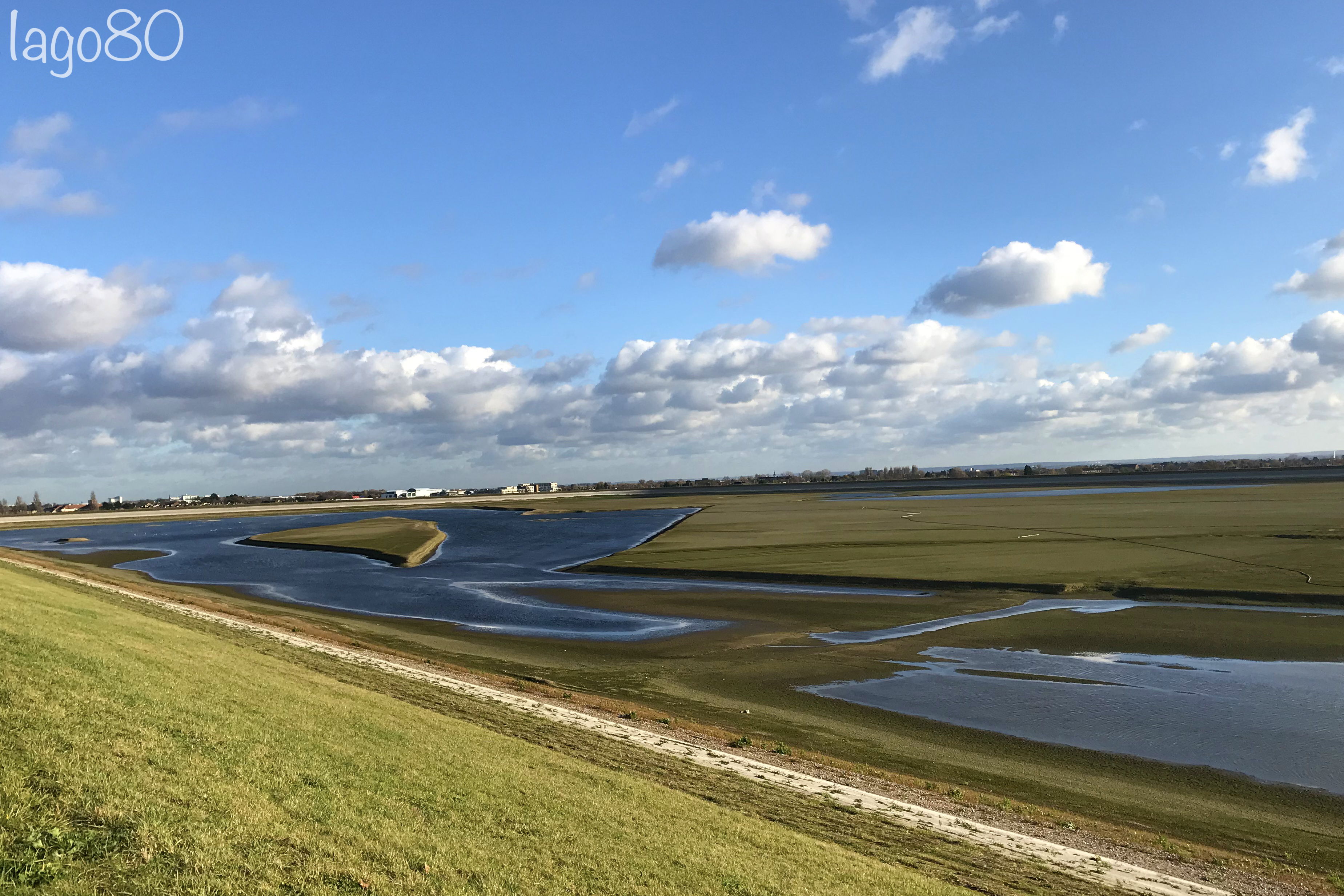 A cold day standing by reservoirs and driving around London, so not exactly the wildest of experiences, but successful and interesting nonetheless. On the drive on the M25 on the way home, Nick and I counted raptors ending with a final score of 23 Red Kite, 4 Buzzard, and 1 Kestrel (not all that long ago those numbers would have probably been read in reverse).

*The debate is currently underway as to whether this is a European Shore Lark or the much rarer sub-species, American Horned Lark. I will leave that matter to the experts.

The City of London Cemetery is enormous.

At 200 acres, it is one of the largest cemeteries in Europe and has a network of roads making it seem like a town of death. I understand that around one million people have been buried here and there are about 150,000 graves. If the maths of those two figures doesn’t add up to you, that is because the bodies are, literally, buried on top of one another.

The cemetery is not as interesting historically as some of the other London burial sites like Highgate, but it is of interest to me as it is a huge green space almost surrounded by my local patch – with the Eastern end of the Flats on one side and the Roding, Old Sewage Works, and Wanstead Park on the other.

It is full of manicured lawns, gardens, tree-lined avenues, and grave stones by the many thousand ranging from little wooden crosses to enormous, and often very gaudy, monolithic mausolea. But there is also a small corner that is not tended neatly by the groundsmen – a grove of trees clustered by the boundary fence near the Roding – known as the Birches nature reserve:

X marks the spot of the wild area. Thanks to Google for the map

This small section of woodland is wonderfully wild. I presume that very few people indeed ever visit – partly because those of us likely to be interested in it would have to walk very far out of our way to get there as there is only one entrance to the cemetery and the fence is  high. In fact, it is so poorly known that I can only find one one reference to the fact that it is a nature reserve at all.

Everything was wet. The leaf litter is so thick that walking around on the mulch is like walking on pillows. With all the mosses, fungi and ferns, it felt like I was experiencing the original Atlantic Oakwood temperate rainforest, not some small sub-urban plot re-wilded a decade ago (although this is wonderful evidence of how quickly nature can take back over if given the chance to thrive without being overly ‘managed’).

Indeed there was a lot of water in this grove, but I knew that from often peering through the fence just visible to the right in the photo below: 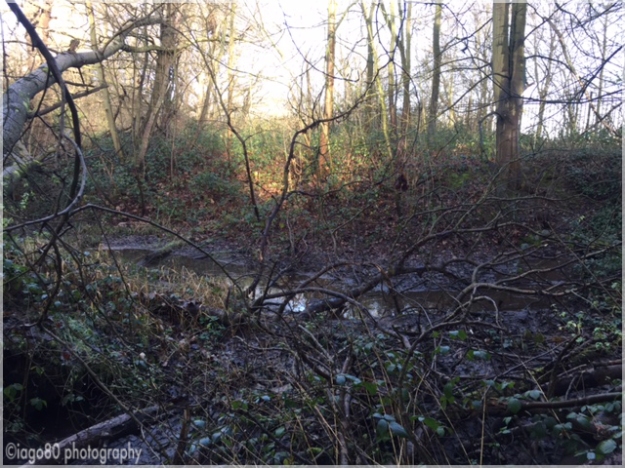 That water collects as a pond and is the beginning of the poorly known Alders Brook. I had come in search of its source, and with limited thrashing about, I found it… sort of: 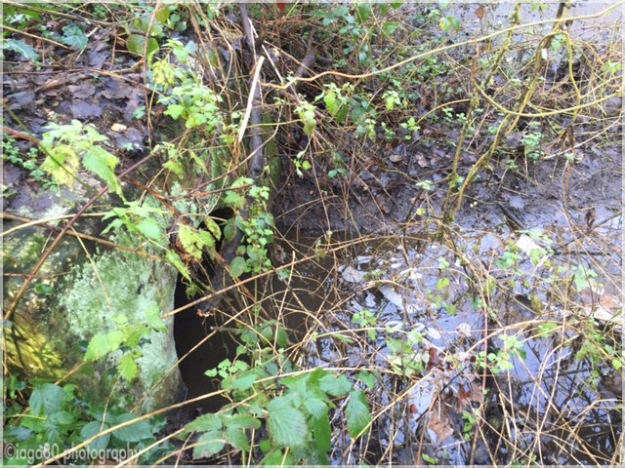 The concrete culvert pipe runs through the ditch that I understand was once part of the ‘Great Canal’ dug for the Manor of Aldersbrook. This is the first opportunity to see the Alders Brook. It presumably trickles down from the higher land off the Wanstead Flats (maybe including any overflow from Alexandra pond) and through, or hopefully beneath, the catacombs and graves of the cemetery.

The Alders Brook then flows under the fence and splits North and South. The Northern stream is a dead-end and so the water is stagnant, but South it flows into the Roding.

The Birches reserve is a known site for Woodcock and Snipe – the resident Woodcock seemingly roosts in this area and then flies out in the evening to feed on the Ilford Golf Course at night. I didn’t see any Woodcock and, actually, never have on the patch, but I intend to make an effort this year to tick it off.

I am indebted to Paul Ferris’ excellent Wanstead Wildlife website for much of the background information and history presented in this post.

All photos were taken on my iPhone and for some reason are lower resolution than usual – apologies.

The busy and well-kept parks of central London can easily be overlooked when it comes wildlife, but they often contain hidden natural treasures.

An astonishing 196 species of bird have been recorded in Hyde Park and the adjoining Kensington Gardens since 1889. The birds have become used to throngs of human visitors and many have become almost reliant on the deliberate or discarded food that we leave. This is especially the case with the gulls..

… and the waterfowl, such as this nesting coot and its vulnerable and colourful young…

A further stronger sign of the influence of humans on the birdlife in parks is the presence of exotic non-native bird such as this beautiful Red-crested Pochard (don’t worry, I’m not adding this to my year list as that would be cheating):

“I feed the pigeons I sometimes feed the sparrows too, it gives me a sense of enormous well being (parklife)” – Blur, 1994 (is anyone else freaked out by the fact that Parklife was released over 20 years ago!?)

In my quest to photograph as many species of birds in the UK in a single year, you won’t be surprised to know that I didn’t visit Kensington Gardens on Sunday to photograph introduced birds. I came to find a Little Owl and some baby Tawny Owls that I learned were in the park.

I followed the directions to a specific tree from a prolific bird blogger who visits the park every day [I seem unable to link to a rival blog platform site, but just Google “Kensington Gardens and Hyde Park birds”]

But the Little Owl that had been every day for ten days was not showing. Then I saw the blogger himself, also looking for the Little Owl (the species itself initially introduced to the UK) and then feeding the birds from his hand (another sign of how tame park birds are): 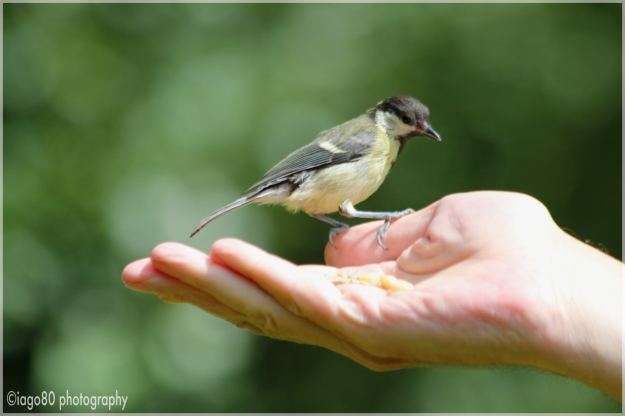 Through speaking with this birder and two others, I was directed to another tree nearby where the Tawny Owls had been seen. Sure enough, high up in a Sweet Chestnut tree, as the wind blew, there was an obscured view of some brown fluffy feathers. I walked all around the tree for a better view and eventually I saw some movement and a bundle of fluff joined its sibling on a higher branch. At the right moment one of the chicks raised its head and I managed to photograph my 85th species of bird through a tiny gap in the dense leaves and branches:

The owls were not the only fluffy things of the day. I also snapped a young Jay that nervously pondered whether to feed from the local birder’s hand: 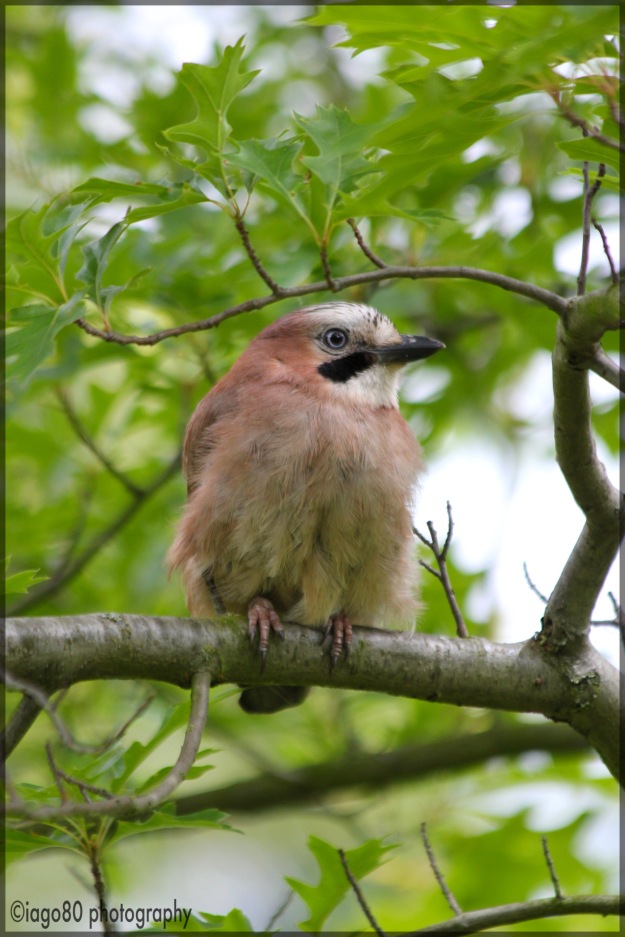 Despite currently not being able to think about much other than moving house, I hope to take a break soon and return to photograph the Little Owl (that I understand was back today after his day off on Sunday … grrr!)

Later that day I visited friends in Ealing. As we walked to their house I was reminded of a glaring omission in my year list so far. I have been blessed in photographing some scarce and even rare birds, but I am still missing one of our most common: the Song Thrush. I have seen a couple when my camera wasn’t handy and heard many, but still not photographed any.

As I walked with my wife by a construction fence next to a cordoned-off park, I saw the flash of a spotty bird in flight. It landed far away and I whipped out my camera. It wasn’t a Song Thrush, but it was its close cousin, and also a species I have not yet recorded for the year. Despite the poor quality and blurry shot, the Mistle Thrush became my 86th species of 2014: