So there I was, doing my tree survey (more on that another time) and minding my own business when a delinquent juvenile came and shook everything up. Literally!

I was by Alexandra lake when I noticed a lot of bird alarm calling. Then everything hit the deck or the water… crows, gulls, and pigeons all happily circling a minute earlier were suddenly grounded. I ran out from under the trees expecting to see a Peregrine passing high overhead. But it wasn’t. It was dive bombing birds on the ground!

There is a steep hillock on the western side of Alex and the Peregrine was out of view so I ran some more along the northern shore and around the side of the hill to hopefully get a better view.

“Be careful what you wish for” old people like saying. I now think they have a point. As I emerged into view of the pitches, the Peregrine was hurtling straight towards me at head height! For half a second I genuinely thought it was going to attack me, and even with hindsight, I think for half a second it actually contemplated it, but it pulled up hard and over me and it was then that I realised what was ‘wrong’. As it exposed its undersides to me, in my closest ever experience with a wild Peregrine, I could see the heavy streaking rather than the usual barring; it was a juvenile.

I thought it would take a lot to top my Peregrine experience last week. But, this was something else. For the next ten minutes or so, I watched this youngster race around like some kind of avian joy-rider. Nothing was going to stop it and it would quite like to kill EVERYONE! I watched it plummet on a grounded crow, knock it sideways, and then try and jump on it from just a few feet away (this second time sidestepped by the stunned corvid).

It circled around the pitches like it was a Nascar racer. There was none of the careful watching from on high, followed by a well-aimed stoop, this was just hit and run. Soon, the grounded birds got fed up, or rather, pissed off. Some of the gulls and crows took off to mob this angry annoyance.

Thousands and thousands of generations of genetic programming have turned the Peregrine into a fine tuned killer. Every one of its physical attributes, its senses, and – most importantly perhaps – its instincts are honed to kill. This juvenile had those instincts in spades – possibly heightened by teenage hormones (I am clearly making this up now, but watching it did make me wonder), but not all that much of the skill or preciseness of an adult.

Courageous crows would mob the Peregrine, but then – using manoeuvring that would not be out of place in a Star Wars space battle scene – the falcon would turn the tables and attack its attackers. At one point, it sped towards a London Plane tree, surprised a perched crow and snatched at it with its talons sending the corvid spinning. The crow survived, the Peregrine had only a black feather in its talons.

If my description thus far has failed to persuade you that this falcon was a furious, feathered teenager, then try this out for size… it kept hold of the feather and landed on the football pitches where it proceeded to jump and stamp, and tear and rip at the feather like petulant brat… 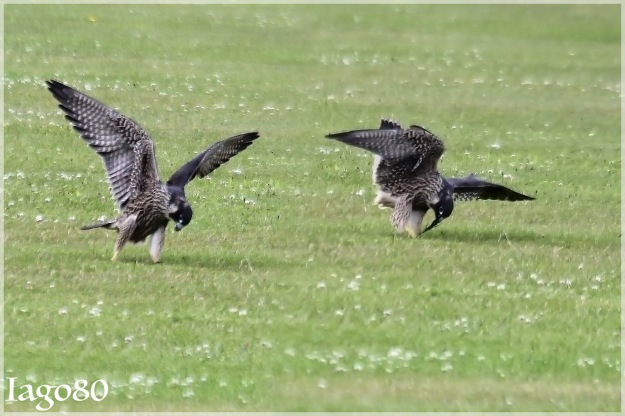 I am not sure who was more breath-taken: the falcon or me. It looked up angrily as gulls dive bombed it before taking off and repeating the process all over again. It landed three more times! Hopefully this youngster will soon improve its hunting skills.

Last week, I saw a family of Peregrines, and today I watched a juvenile practise hunting, all on the patch. They have clearly bred close by and I hope today’s experience is the beginning of more close encounters with these fantastic birds on the patch.

6 thoughts on “Peregrine: hit the deck!”