The Wanstead Flats often wears a coat of early-morning mist. 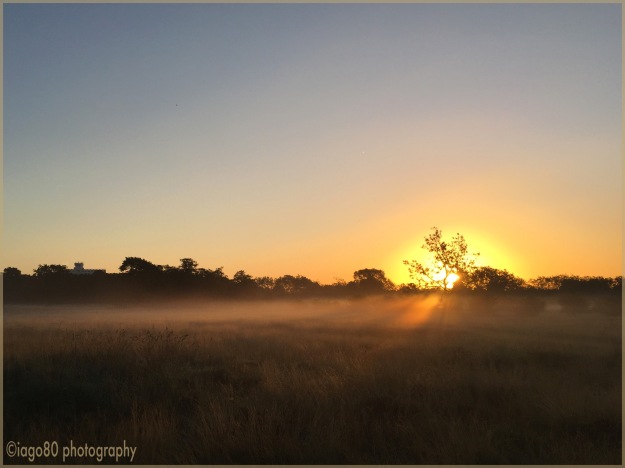 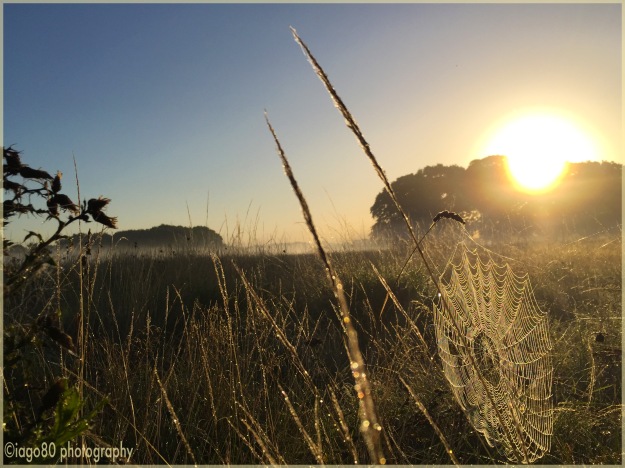 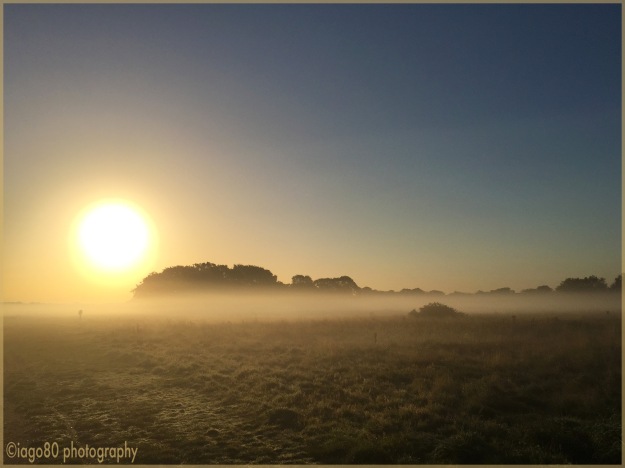 Two weekends ago I walked around mesmerised by the familiar landscape and how different it can appear. As the sun rose, the mist disappeared like it was a mirage, and the day blazed with early-autumn warmth.

Water Rail
At the other end of the patch, literally the eastern extremity from my home in the West, I bumped into Bob Vaughn by the river Roding. He had just been watching two Water Rail wade and swim against the flow of the river. We stayed together for a while and eventually Bob spotted one of them in the distance gingerly poking its head out of the reeds in that way that rails do. That was my 94th patch tick of the year.

It was a long way away, but I managed to get this snap of it in the distance: 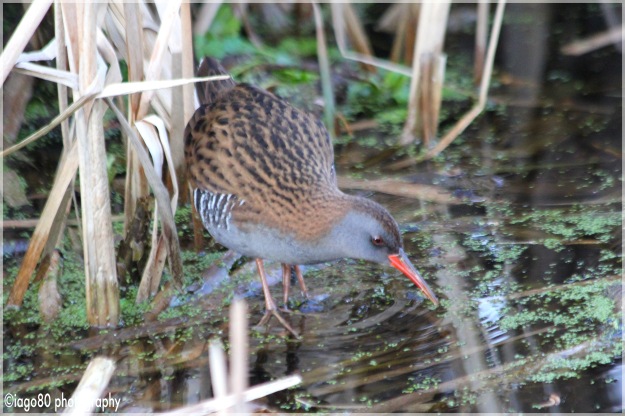 If your BS detector isn’t squealing at you now like a water rail, then it should be. The photo above is actually one I took in January of this year at Rainham when I was literally a few feet away from the bird which was out in the open – a highly unusual situation. The actual photo I took in Wanstead wasn’t quite as good: 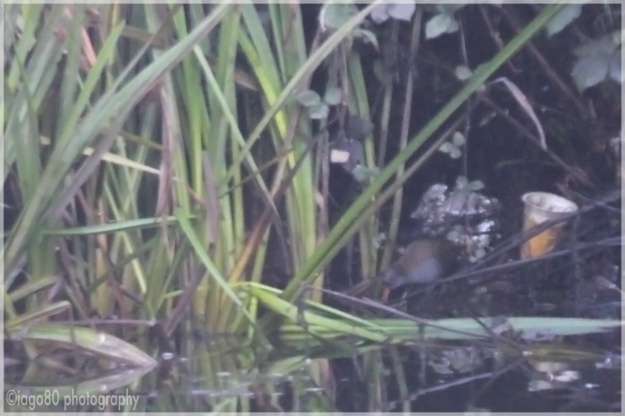 I stayed ‘with’ the rail for about an hour and was peering at the place where it had been from across the river when a pig started squealing beneath my feet. Of course, it wasn’t a pig. It was the other water rail hidden deep in the reeds below me.

Misty river
The following weekend I drove out to the Thames at Rainham in Essex. The area is known as ‘stone barges’ after the concrete and steel barges moored there – it blows my mind that these things actually floated, but apparently they were actually used during the second world war to transport fuel (I am feeling slightly scared I am being gullible just writing this).

Unlike the low carpet of fog on the patch the weekend before, the Thames at Rainham was engulfed in mist.

I walked along, with my scope, watching Redshank, tens of Meadow Pipits, a probable Tree Pipit, a distant Wheatear, loads of skylark, and a Stonechat (some of them captured far better than I did by local birder, Shaun Harvey, who I met along the way). A dog-walker stopped me and commented that it wasn’t very good weather to take photos. I was a bit confused as I wasn’t taking photos, I was looking through a spotting scope, but I exchanged pleasantries and walked on.

It was only after we had parted ways that I realised how much I disagreed with the man. It is true that the cloud joined earth and sky with a blurring or negating of horizon like some bridge between the elements, but just as watercolour often displays a washed out bleakness in art, so can the camera pick up some of the mood of this weather. Perhaps pathetic fallacy in action, although my mood was pretty good and clear but I just wanted to show I haven’t forgotten my literary terms from my days in academia: 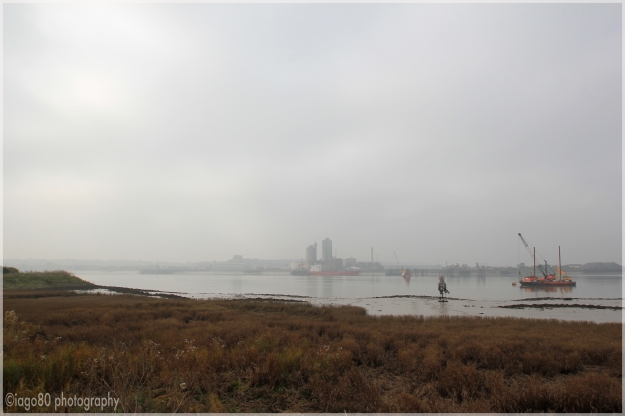 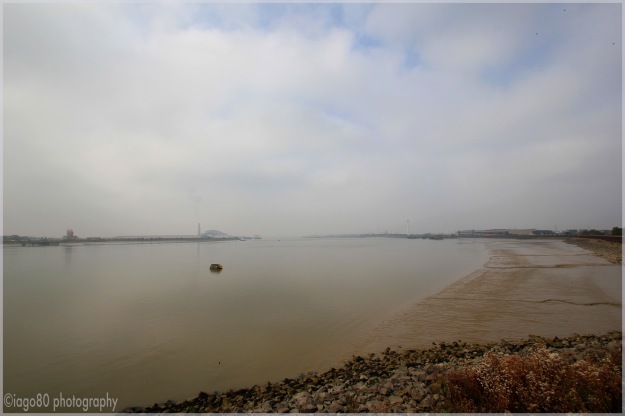 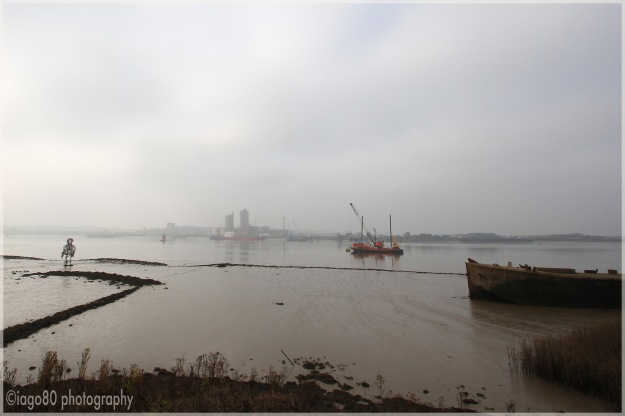 Later that day I also visited the nearby RSPB reserve – on the other side of the gigantic rubbish dump from Stone Barges – where I listened to numerous Cetti’s Warbler with their calls exploding out of the mist and watched a distant Heron move through the dense atmosphere; the moisture in the air removing most of the colour from the scene, but none of the beauty: 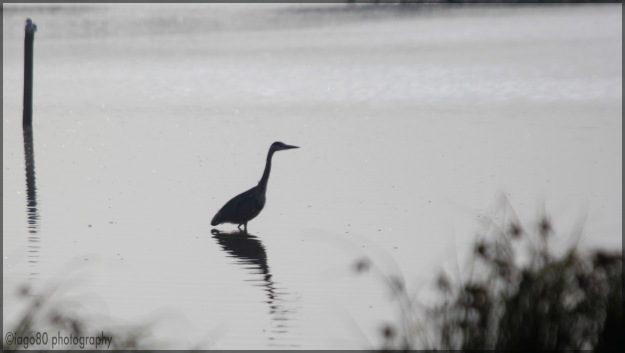 And eventually, that evening, when the fog had gone (if you are questioning my use of ‘mist’ and ‘fog’ interchangeably, I believe I am correct in understanding these blurry weather forms are indeed blurred in definition as well), I raised my eyes to the newly blue sky. There in the far and high distance, was a dot. That dot was a soaring Marsh Harrier, that I ambitiously pointed my camera at: